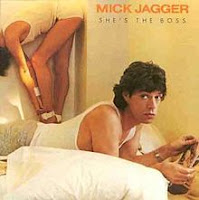 
Side one opens with “Lonely at the Top”. Written by Jagger with Keith Richards, this one talks about one of the downsides of fame. I instantly liked this song as it has a fantastic drumbeat and catchy musical hooks. The song climbed to number 9 on the US Mainstream Rock chart.

“½ a Loaf” is a commentary on a relationship that is less than fulfilling, one that has degenerated to barely seeing one another any more.

“Running Out of Luck” has a strong synthesizer sound and a bawdy bass line. Together they give the song a bit of a dangerous edge. I could easily see the song used in the background of a scene on a show like Miami Vice back in the day.

The groove stays down and dirty with the next track, “Turn the Girl Loose”.

Things slow down with the country-tinted ballad “Hard Woman”.

Side two begins with “Just Another Night”. As the first single, it went to number 32 on the UK charts, number 12 on the US Billboard Hot 100, and number 1 on the Mainstream Rock charts. I can remember this one being played quite a bit out at the clubs in 1985 as it has a solid beat that was easily played up for a dance remix.

The second single “Lucky In Love” only got as high as number 91 in the UK. In the US, it stopped at number 38 on the Billboard Hot 100 yet made it all the way to number 5 on the Mainstream Rock chart. This one is my favorite track off of the album despite the fact that it did not do as well on the charts. I remember the video running on MTV as well.

“Secrets” is next. It too is very danceable, something I definitely cannot see Jagger having been able to do with the Stones.

The album closes with the title track. “She’s The Boss” has a different, bouncing beat to it that makes it differ from what has come before. I find it amusing to think of Jagger in a relationship where he is not the dominant one.

I owned a copy of She’s The Boss on cassette, bought during the summer of 1985 while I was working my first college co-operative education job in New Jersey. I can remember playing this one a lot, on the cassette deck in my car or the small boom box radio I had. Listening to this one again after so many decades was such a treat. I felt the whole record worked; each track had something good to offer. I always thought that the tracks were a good mix of rock with danceable rhythms, thanks in part to co-producer Nile Rodgers. If this one ever comes up for digital downloads, I am definitely going to add it to my download list.
Posted by Martin Maenza at 4:30 AM