America - View from the Ground 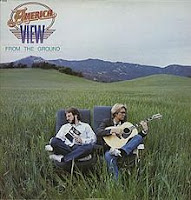 Today (July 15th) marks the thirtieth anniversary of the release of View from the Ground, the tenth studio album from the American folk rock group America. At this point, they were a duo consisting of Gerry Beckley and Dewey Bunnell (found Dan Peek left the band in 1977).

In a number of ways, this was viewed as a comeback album for the group. It peaked at number 41 on the US Billboard Hot 200 (their previous two releases didn’t crack the top one hundred). It also provided them their last top 10 hit single to date.


Side one opens with that first single “You Can Do Magic”. Written by Russ Ballard, the song went all the way to number 8 on the US Billboard Hot 100 and number 5 on the US Adult Contemporary chart. Around the world, it charted at number 59 in the UK, number 37 in Canada, number 30 in Australia, number 27 in Italy, number 20 in Ireland and number 12 in New Zealand. I remember this song very fondly as it played all over the pop radio airwaves during the summer and fall of 1982; it has always been a favorite of mine and is ranked a four-star track in my iTunes library. I think the group took all the strongest aspects of their 70’s songs (strong vocal harmonies, gentle guitar riffs) and peppered them with a more contemporary sound of the 80’s.

Those same song aspects continue on the next track. “Never Be Lonely” was co-written by Beckley and child-actor-turned-musician Billy Mumy. The song speaks of new found love and never wanting to be without that person.

The guys slow down with “You Girl”. They also strip things back to just their voices, two guitars and a gentle drumbeat, the style that made them famous in the decade prior.

The B-side to the second single was “Inspector Mills”. The song has a dramatic feel musically to go with the lyrics about a man hiring a detective to track down the woman who has walked out of his life.

“Love on the Vine” has a finger-snapping, gentle swaying rhythm to it. The lyrics have a sunny optimism to them. Together, I find them to work quite well.

Side two begins with “Desperate Love”. Musically, it has a harder rock edge to it.

“Right Before Your Eyes”, the second single, climbed to number 45 on the US Billboard Hot 100 and number 16 on the Adult Contemporary chart. It was written by Canadian singer Ian Thomas, the younger brother of SCTV comedian Dave Thomas. I remember this gentle ballad from my radio days as well. I like how it references old time films starring the likes of Rudolph Valentino and Greta Garbo.

The third single, “Jody”, failed to make any major chart impacts. The lyrics speak fondly of a former love that simply will not be forgotten. There is still a spark that happens just at the mention of her name.

“Sometimes Lovers” continues the slower tempo with a look at how no relationship is perfect one hundred percent of the time. As the lyrics state, sometimes lovers don’t act like or do what they should.

“Even the Score”, which closes the album, was also the B-side of the first single. The guys decide to leave us on a more up-tempo note with this track about payback for a broken heart.

I had not heard this entire America album until doing this review. That being said, I found View from the Ground to be a solid soft-rock record. This is most definitely one I would have easily enjoyed back in 1982 when I was in my final year of high school. There are definitely a few tracks I have earmarked to pick up in the future.
Posted by Martin Maenza at 4:30 AM