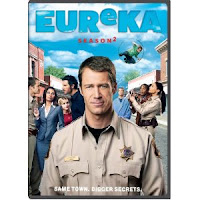 So, my son and I are continuing our summer viewing by working through the series Eureka (click here for my comments on season one).

So, with this season we get an additional cast member in character Zane Donovan (played by Niall Matter), a rebel genius. This is a good addition as it adds some interesting character dynamics and conflicts with an already solid group of characters.


We also get introduced to Abby Carter, Jack's ex-wife, who shows up for Zoe's sixteenth birthday. Her arc is only a few episodes but it too pays off well.

This season has a lot of interesting scientific mysteries for Carter and the rest of the Global Dynamics brain-trust to handle. These include: spontaneous combustion, weather gone wild, shared dreams, cryogenics and so much more. The mix of humor, science, and mystery is solid.

For me though, one of the strongest elements is the tighter continuity across episodes with a greater focus on developing subplots. The second season builds right off of season one's finale, and it carries an arc that lasts across the thirteen episodes which ran during 2007. Even with nine different writers involved, you get a sense that things were mapped out in advance so that key story-beats are hit upon each time along with the crisis-of-the-week. The season has a good pay off for viewers who invested their time each week.

This definitely puts my faith in the writers that the remaining three seasons will be as equally entertaining.

Now, the big question remains: will Netflix put up season 5 by the time we get through seasons 3 and 4? Given how quickly we are digesting these, I have a feeling we might have a bit of a wait. We shall see.
Posted by Martin Maenza at 4:30 AM