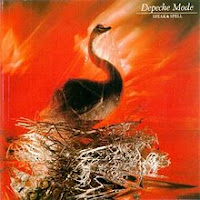 In 1980, Clarke formed a band with Dave Gahan (vocals), Martin Gore (keyboards, guitars), and Andy Fletcher (keyboards). Together, they took the world of synth-music by storm as Depeche Mode.

The group’s debut album Speak & Spell was released on October 5th, 1981. Clarke composed all of the tracks on the record which went to number 49 in Germany, number 45 in New Zealand, number 28 in Australia, number 21 in Sweden, and number 10 in the group’s native UK. In the US, it barely cracked the Billboard Hot 200 (only going to number 192) though it did find popularity on college radio stations.


Side one opens with “New Life”. This first single went to number 22 in Ireland and number 11 in the UK; in the US it reached number 29 on the Dance charts. The rhythm is poppy and infectious.

“I Sometimes Wish I Was Dead” is interesting in that the title does not appear at all in the lyrics. They tell of a relationship where the woman is using the man for her own physical needs and then heading off to her life. It is sort of a reverse of wham-bam-thank-you-ma’am.

“Puppets” is all about being a controlling party in a relationship.

“Boys Say Go!” is a straight-up party anthem for the underground gay community.

“Nodisco” tells of someone dancing enthusiastically in an underground club with 70’s style disco moves.

A gorgeous guy is the topic of “What’s Your Name?”. He is so pretty that he turns heads on the street with everyone wanting to know who he is. The song is light and poppy, easy to dance to and completely carefree.

Side two begins with the urgent rhythms of “Photographic”. The whole thing has a bit of a stalker, voyeuristic vibe to it. It repeats the chorus like a hypnotic mantra, further adding to the obsession.

“Tora! Tora! Tora!” is a very interesting musical composition with layers upon layers of synth riffs laid out. The lyrics tell of a nightmare played against an atomic war backdrop; the line “I played an American” is rather telling in that it hints that the dreamer is the one that destroyed the relationship.

I like the contrast of the lighter notes with the heaver chords on “Any Second Now (Voices)”. In a lot of ways it reminds me of what Clarke would do later with the first Yazoo/Yaz album.

The second single “Just Can’t Get Enough” closes out the album. It went to number 29 in New Zealand, number 4 in Australia, number 14 in Sweden, number 16 in Ireland and number 8 in the UK; in the US it got as high as number 26 on the Dance charts. I absolutely love this song; it is five-star rated track in my iTunes library. Every time it comes on, from the first notes of that repeated synth riff, my mood immediately changes, brightens. I literally can’t get enough of this song. The lyrics are about the pure gratification of a loved one.

The US version of the album removed the second track, shifted the third to the second spot and added in the song “Dreaming of Me” as the third track on side one. This is another synth track that adore.

Clarke left the band after this album, and went on to form Yazoo with Alison Moyet. Later, he and Andy Bell formed the group Erasure.

As a fan of synth-pop dance music, Speak & Spell is right at home in my early 80’s listening category. I’ve always been a fan of Clarke’s later work, so this Depeche Mode album is the perfect starting place to enjoy his music.
Posted by Martin Maenza at 4:30 AM