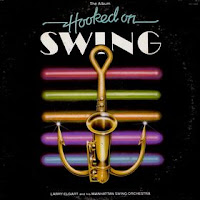 American born jazz bandleader Larry Elgart, also an alto saxophone player, formed his first professional ensemble in the mid-1940’s and made his first recorded album in 1953.

In June of 1982, thirty years ago this month, Elgart and his Manhattan Swing Orchestra released Hooked On Swing, which combined the style of music he had playing for decades with the recently popular medley-style of dance music made popular by such acts as Stars On 45. The album went to number 24 on the US Billboard Hot 200.


Side one opens with the title track. The single version of “Hooked On Swing” went to number 31 on the US Billboard Hot 100 and number 20 on the US Adult Contemporary charts. The album version is a medley of fourteen classics from the swing music era including “In the Mood”, “Sing Sing Sing” and “Take The A Train”.

“Hooked On Big Bands” include eight classic songs from the Big Band era like “Chattanooga Choo Choo”, “Stompin’ at the Savoy” and “Bandstand Boogie”.

“Hooked On A Star” is Elgart’s tribute to the Chairman of the Board himself, Mr. Frank Sinatra. In the mix are “New York, New York”, “Come Fly With Me”, “Night and Day”, “My Way”, “Witchcraft” and more.

Side two starts with “Hooked On Astaire”. This track is a tribute to musical numbers from many great films and songs by Fred Astaire.

“Hooked On The Blue(s)” goes for a color based theme with six songs all including the word “blue” in their title.

“Hooked On Broadway” pays tributes to shows like Hello Dolly, Guys and Dolls, West Side Story and Cabaret.

I have always enjoyed the sounds of the big bands and swing. I think a lot of that came from watching The Lawrence Welk show at my grandparents’ house most Saturday nights. When Hooked On Swing came out in 1982, it was following on the heels of the Stars On 45 pop medley albums and the Hooked On Classics album by the Royal Philharmonic Orchestra in 1981. The cover of this album even took a similar look to the latter.

I definitely think this was a fun sampler of many classic songs and a great way to introduce a new generation of 80’s kids to them. I know when I re-listen to these tracks I cannot help but be in a good mood.
Posted by Martin Maenza at 4:30 AM