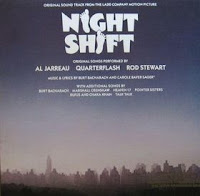 Thirty years ago this month, the Ron Howard directed comedy about a former stock-broker (played by Henry Winkler) who is forced to take a job in a New York City morgue. There he is partnered on the night shift with a wildly exuberant co-worker (played by Michael Keaton). Together, along with a struggling prostitute (played by Shelley Long), they turn that morgue upside down.


To go along with the film was an all-star soundtrack. Today we will look at that album from July of 1982. The entire first side works thematically as it features songs composed by Burt Bacharach and Carole Bayer-Sager.

Side one opens with the title track as performed by Quarterflash. The single for “Night Shift” only got as high as number 60 on the US Billboard Hot 100. It opens with that low-beat tempo and soothing saxophone, setting a tone that paints the city after hours. I have always been a fan of Rindy Ross; she is definitely an under-appreciated lady vocalist of the 80’s.

Next up is “Street Talk”, a saucy Latin flavored instrumental groove.

Al Jarreau is up next with “Girls Know How”. His smooth R&B styling with jazz infusion is solid here.

The mid-tempo ballad “The Love Too Good to Last” by the Pointer Sisters, which first appeared on their 1980 album Special Things, follows.

Rod Stewart closes the side with “That’s What Friends Are For”. His rendition, which works absolutely perfect as a solo, also appears on his expanded CD version of his 1983 album Body Wishes. Three years later, Dionne Warwick would have a number one hit with the song, with a little help from her friends Elton John, Gladys Knight and Stevie Wonder.

Side two starts off with “Someday, Someway” by Marshall Crenshaw. The song appeared earlier that year on Crenshaw’s self-title debut album (click here for that album review). As a single from that record, it went to number 36 on the US Billboard Top 40 chart with the help of this film. I love the rhythm of this one with the hand-claps, the guitars and drums. The lyrics lament on the difficulty guys have understanding women sometimes. The tune has a bit of a Buddy Holly sound to it, giving it a comfortable classic rock vibe.

Heaven 17 kicks up the dance groove with “Penthouse and Pavement”. The song was the title track from the UK synthpop group’s late 1981 debut, an album with is one of my absolute all-time favorites. This song, on its single release, went to number 57 in the UK and number 37 in New Zealand.

Talk Talk has us hearing double with “Talk Talk”, the first track and single from the group’s debut album The Party’s Over which was also released in July of 1982. Yes, I will be reviewing this one here on the blog very soon. The song, actually a new wave cover of a 1976 song called “Talk Talk Talk Talk” by the British punk band Reaction, was the second single from that album; it ultimately got as high as number 23 in the UK and number 75 on the US Billboard Hot 100.

Rufus and Chaka Khan serve up “Everlasting Love”, which first appeared on their 1977 album Ask Rufus. The song is a soulful ballad served up with sultry vocals by Khan.

The album closes with Bacharach’s instrumental “That’s What Friends Are For (Night Shift Love Theme)”.

I remember Night Shift quite well. It was the summer of 1982, right between my junior and senior years of high school. I was seventeen years old and could go see R-rated films in theatres without any parental approval, and this was one of the films I saw during those summer months. This was my first exposure to Michael Keaton and Shelley Long, though I knew Henry Winkler for many years from television. I always got a kick out of seeing him in roles that fell outside of the confines of his iconic Fonz character. This film and Heroes from a few years earlier definitely showcased other sides of the actor.

Of course, I enjoyed the music of the soundtrack too. I like how they mixed in some current music especially on the second side, giving it a well grounded sound for 1982. I was an early fan of Quarterflash as well, so having them do the title track was a highlight.

I think it might be time to break out the DVD of the film and have some good laughs.
Posted by Martin Maenza at 4:30 AM