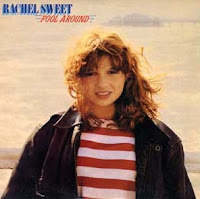 The Akron, Ohio, born Sweet started out doing commercials at age six and was an opening act as a singer for Bill Cosby by age twelve. Her first recording was in 1974 in the category of country music. However, she switched over to rock music and was signed to the Stiff Records label.

On October 6th of 1978, at the age of sixteen, she released her first studio album Fool Around. Both the UK and the US versions of the album had eleven tracks. Two of the tracks from the UK release were swapped out with two different ones on the US version. For my review today I will focus on the US track listing.


Side one begins with “B-A-B-Y”. The tune was written by Isaac Hayes and David Porter, and was originally released as a single in 1966 by Carla Thomas who is often referred to as the Queen of Memphis Soul. Sweet delivers a soulful pop rendition of this classic here.

“I Go to Pieces” was written and originally performed by Del Shannon. Sweet’s version straddles the line of bubble-gum pop and heartfelt ballad.

“Who Does Lisa Like?” has a more rock edge to it thanks to the guitar work of Pietro Nardini and the percussion of Mark Sugden. If you listen carefully, you can pick up Sweet’s Stiff Records label-mate Lene Lovich on the background vocals.

“Wildwood Saloon” draws upon Sweet’s earlier dabbling in country music. The musical arrangement adds to the sadness in her voice.

Dusty Springfield had a hit in 1964 with “Stay Awhile”. Sweet’s cover here has innocent quality, giving the song a first-love aspect.

I like the saxophone elements on “Suspended Animation”; they along with the backing vocals give this one an ethereal element.

Side two starts with “Sad Song”. Again, Sweet swings to the country rock side for this track which sounds like it would be right at home on a Linda Ronstadt album.

“It’s So Different Here” has a unique sound to it thanks to a beat drum rhythm and a plucking guitar section. Paul Gillieron plays the pennywhistle here.

“Cuckoo Clock” is the first real hint of Sweet’s new-wave sound. It features a guitar-heavy, high-speed tempo to it.

“Pin a Medal on Mary” is up next. Mickey Gallagher is featured on piano on this pop-rock track.

The album closes with the Elvis Costello penned “Stranger in the House”. Sweet delivers this ballad in a country style, complete with slide guitar accompaniment.

Fool Around is definitely an interesting debut as it features quite a few different musical styles rolled up into a single package. It is a shame that Rachel Sweet never got the chart exposure when she came on the scene. Had she debuted a few years later, when MTV was coming on the scene, I think her fan base would have been greatly increased.
Posted by Martin Maenza at 4:30 AM