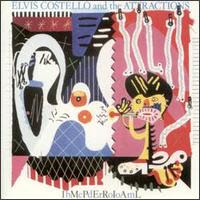 
Side one begins with the stripped-down, low-key “Beyond Belief”. Costello has some interesting vocal inflections on this one. I like the lyrical reference to Lewis Carroll’s fictional heroine.

Steve Nieve‘s organ notes dances nimbly in the background of “Tears Before Bedtime”. This one tells of a guy who does not want to fight with his love before bed; it will end up keeping him awake all night.

The use of just a simple guitar accompaniment at the start of “Shabby Doll” gives the song about being totally broken a very somber tone.

“The Long Honeymoon”, with its smoky jazz swing, is full of suspicion of infidelity in a marriage. There are even implications that the man is cheating on his newlywed wife with her best friend.

The next track, “Man Out of Time”, only reached number 58 on the UK charts when released as a single.

The pace continues to slow with the ballad “Almost Blue”. It summons up images of a dimly lit piano bar where a sad singer pours out his broken heart at the keys while the bartender pours out another round of drinks.

“…And in Every Home” has an aristocratic air to it musically thanks to the orchestration by Nieve. Behind the façade though is a miserable relationship where the wife is running around with other men and the husband is contemplating suicide.

Side two opens with “The Loved Ones”, an up-tempo ditty about domestic violence.

“Human Hands” plods along with a slow, steady beat from Pete Thomas on drums. The lyrics present a longing for physical contact that has all but disappeared in the relationship, leaving him only the TV and shadows for company.

The slow pace continues with “Kid About It”, another song about complicated issues in a failing relationship.

“Little Savage” picks the tempo up a tad with a song about an instant sexual attraction.

“Boy with a Problem” was a collaboration between Costello and Chris Difford (the Squeeze singer penned the lyrics). Costello conveys the emotional conflict of not wanting to throw in the towel in a troubled relationship.

“Pidgin English” speaks the importance of communication in a relationship.

The single for “You Little Fool” went to number 52 on the UK charts. This one tells of a teenaged girl who is too eager to grow up, to wear make-up and date. Her parents differ on how to handle this.

The album closes with “Town Cryer”, a song about a guy trying to find strength even though his world has crumbled down all around him.

On Imperial Bedroom, Elvis Costello is clearly mining the emotional depths of relationships, putting together smart and symbolic lyrics and rich musical compositions. Not being as deep a thinker, this one fails to fully engage me. That is likely my loss as clearly this is a critical favorite from 1982.
Posted by Martin Maenza at 4:30 AM