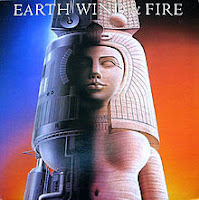 On November 14, 1981, EWF released Raise!, their eleventh studio album. The Platinum selling album went to number 37 in Australia, number 25 in Canada, number 19 in New Zealand and number 14 in the UK. In the US, it peaked at number 5 on the Billboard Hot 200 and number 1 on the Billboard R&B charts.


Side one kicks off the party with “Let’s Groove”. This first single went to number 15 in Australia, number 7 in Canada, number 3 in the UK and on the US Billboard Hot 100, and number 2 in New Zealand; it also scored the number 1 slot on the US Billboard R&B chart. This one gets you moving right from the opening riff, even before the percussion joins in. I used to practice my dance moves in my bedroom as a teenager to this one whenever it came on the radio.

“Lady Sun” keeps the high energy and the dance groove going. It is a celebration of the woman at the center of one’s life, who brings all things good like the Sun in the sky.

The tempo slows a bit for the smooth ballad “My Love”.

Composer David Foster co-wrote “Evolution Orange” as well as played keyboards on the track. This one has a funky dance rhythm to it.

Side two opens with “Kalimba Tree”, a twenty-six second instrumental prologue which leads directly into the next track.

“You Are a Winner” has a gritty, urban edge to its bass groove.

“I’ve Had Enough”, the third single from the album was released outside of the US. It went to number 29 on the UK charts. I like how this one goes from hushed opening notes to a full-out, percussion thumping sound in seconds.

The second single “Wanna Be With You” went to number 51 on the US Billboard Hot 100 and number 15 on the R&B charts. It also won a Grammy Award for Best R&B Performance by Duo or Group. Even with a slower tempo, this one still cooks. The amazing horn section of the band plays a bit part in that.

The album closes with “The Changing Times” and its era spanning groove. It opens with an Egyptian riff and moves into a rock-tinged dance beat.

Raise! is a straight-up dance record with steady beats and solid horns. It is no surprise that this is one of Earth, Wind & Fire’s biggest selling albums and that it was also the best selling R&B album of 1982. If you are in the mood to jam, I would recommend throwing this one on and proceed to getting down.
Posted by Martin Maenza at 4:30 AM