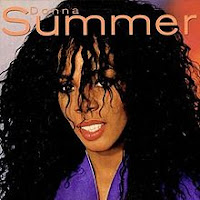 Today (July 19th) marks the thirtieth anniversary of the self-titled Donna Summer. This 1982 release, produced by Quincy Jones, was the late R&B singer’s tenth studio album and contained a variety of musical styles across its nine tracks.

The record sold well and had good chart performance across the globe. It went to number 45 in Australia, number 37 Germany, number 32 in Canada, number 20 in Japan, number 13 in the UK, number 4 in New Zealand, number 3 in Norway and number 2 in Sweden. In the US, it reached number 20 on the Billboard Hot 200 and number 6 on the R&B charts.


Side one opens with “Love Is In Control (Finger on the Trigger)”. As the first single, it went to number 18 in the UK, number 13 in Sweden, number 6 in the Netherlands, number 4 in Canada, and number 3 in Norway. In the US, it peaked at number 10 on the Billboard Hot 100, number 3 on the Dance charts and number 4 on the R&B charts. I have always loved the attitude in this high-energy, funky dance track. I had this one on a 45 and danced to it all the time. It is a great tune for cardio workouts; I give it four stars in my iTunes library.

“Mystery of Love” opens with something out of a gothic romance before settling into a mid-tempo disco groove. This one sounds like a leftover from the previous decade, a cut that did not make the grade for earlier albums.

“The Woman In Me”, the third single, only reached number 62 in the UK and number 33 in the US. James Ingram provided backing vocals on this sensual love ballad; they compliment Summer‘s strong vocal performance. Heart covered this song for their 1993 album Desire Walks On.

The second single “State of Independence” did well in the UK (number 14) and the Netherlands (number 1) but not so much in the US (it stalled at number 41 on the Billboard Hot 100). The song was originally written by Jon Anderson and Vangelis, released on their album The Friends of Mr. Cairo a year before. The song has a reggae swagger to it as the lyrics speak of freedom for Third World nations and spiritual oneness. The backing chorus on Summer’s version is an all-star group with Christopher Cross, James Ingram, Michael Jackson, Kenny Loggins, Michael McDonald, Lionel Richie, Brenda Russell, Dionne Warwick and Stevie Wonder.

Side two starts with “Livin’ In America” which was also the B-side to the third single. This mid-tempo funky groove takes a look at the lives of everyday people, where we each have the option to be whatever we want to be.

“Protection” was written by Bruce Springsteen specifically for Summer. He actually planned to give her “Cover Me” first but decided to keep it for himself, recording it for his Born In The USA album. The Boss did play guitar on this rocking track and provided some backing vocals. Also featured on the track was Louis Johnson (from the Brothers Johnson), Jeff and Steve Pocaro (from Toto), and Roy Bittan (pianist for the E. Street Band). The song was released as the fourth single from the album but failed to make any lasting chart impact.

“(If It) Hurts Just a Little” was used as the B-side to the fourth single. This track was written by Michael and Dan Sembello, and features the former performing on it as well.

“Love Is Just a Breath Away” was co-written by Summer and David Foster, and it features the latter on synthesizer. This mid-tempo number attempts to build some sexual tension but I don’t think it delivers as good as it could have. Summer proved in the 70’s she could bring it; here she seems a bit restricted, perhaps by the arrangement.

“Lush Life”, a cover of a 1930’s jazz standard written by Billy Strayhorn, closes out the album. Summer is on a long list of great music artists across genres to record a version of the song; that list includes John Coltrane, Sammy Davis Jr., Ella Fitzgerald, Rickie Lee Jones, Patti Lupone, Johnny Mathis, Tito Puente, and Nancy Wilson. I actually like her singing this style of music; I found it refreshing for her to go the torch song route. It really allowed her voice to shine through and close the album on a high note.

With all the star power here, you would expect Donna Summer to have been a mega hit. I know I did. However, it might have been an example of too much and too many hands involved. Jones clearly did not bring out Summer’s best like Georgio Moroder and Pete Bellotte did previously.
Posted by Martin Maenza at 4:30 AM