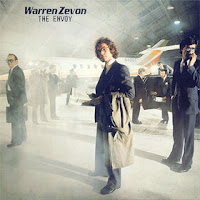 Today (July 16th) marks the thirtieth anniversary of the release of The Envoy, the fifth studio album from the American singer-songwriter Warren Zevon. After strong showings on the charts for his previous two albums (both top 20), this one showed a remarked slide in public favor. It only got as far as number 93 on the US Billboard Hot 200.


Side one opens with the title track. “The Envoy” is very much a political statement of the world affairs at the time, calling for a diplomatic agent to be deployed to defuse them. Not surprisingly, the song contains a lot of relevance today, three decades later.

“The Overdraft” is a rollicking rocker about going on the run. The music carries that tense, urgent feel of the situation. I could see this one used as a great backing track in a film.

“The Hula Hula Boys” was chosen as the B-side from the album’s single. The lyrics tell of a woman who has abandoned him while on a Hawaiian vacation for much native male companionship.

“Let Nothing Come Between You”, the only single from the record, was a minor hit on the US Mainstream Rock charts, reaching number 24. The song is a pleasant pop ditty about people providing advice about who you’re dating, whether you want it or not. The singer has already made up his mind on what he plans to do with his future.

Side two starts with the mid-tempo rocker “Ain’t That Pretty at All”. In his gravelly vocal style, Zevon rages against life and would rather wallow in the negative.

“Charlie’s Medicine” tells the dark tale of a drug-dealer who is killed by one of his well-off, high profile customers. The singer, also one of his customers, goes to the funeral to pay his final respects.

“Looking for the Next Best Thing” is up next, bringing back the strong rocking sound. I like the keyboard hooks in this one.

“Never Too Late for Love” closes the album on a softer note. Zevon’s emotions ring out along side the piano as he experiences an epiphany. Wachtel’s guitar solo is pretty cool too.

I was not a big fan of Warren Zevon’s back in my high school years. Though I heard his songs occasionally on the album-oriented rock stations, I just couldn’t get into him at the time.

That all changed within the last half-decade. I was able to download a Zevon compilation album for a decent price, and that gave me a good exposure to his early catalog including a few tracks from The Envoy. As an adult, I can appreciate more what the singer was doing with his music. I have definitely become a fan.
Posted by Martin Maenza at 4:30 AM