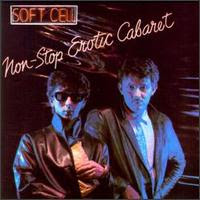 Happy fifty-fifth birthday today (July 9th) to English singer/songwriter/musician Marc Almond. In the early 1980's, he was one half of the synth-pop duo Soft Cell, along with instrumentalist David Ball. Almond has gone on to sell over 30 million records worldwide over the past three decades.


Side one kicks off with "Frustration" with its ping-ponging beat. The lyrics lament going through an average life with nothing amazing to show for it.

Next comes "Tainted Love", a cover of a song originally performed by Gloria Jones in 1964. Known as one of Soft Cell's signature tunes, this one was released as the first single from the album. It was then combined on a twelve-inch dance mix with the group's cover of "Where Did Our Love Go?", a combination that proved to be gold. The track went to number 1 in Australia, Belgium, France, Germany and the UK. Here in the US, the song hit number 8 on the Billboard Hot 100 and number 4 on the Dance charts. I like how the guys slowed this one down and added those powerfully punctuating synth hooks.

"Seedy Films", with its funky strut, definitely is a response to their lives in New York City at the time. It is a reflection of the darker side of the Big Apple.

"Youth" follows with its haunting vocals and wistfull melody. The synth sounds like a tolling bell, marking the passage of time as youth fades.

The side ends with "Sex Dwarf", an ode to sexual fetishes of a most different kind. Clearly Almond felt comfortable singing about topics that any mainstream artists would tend to shy away from. This is part of what put them on the cutting edge of early new-wave acts, even if it meant the songs were relegated to underground clubs and college radio airplay.

"Entertain Me" starts off side two with its frantic pacing. It is as if the circus has come to town, complete with shouting crowds.

It seques pretty seamlessly in the next track "Chips on My Shoulder", a song filled with anger at the world around him.

The center piece of the side is "Bedsitter", a sort-of morning after review of the previous night's exploits. This second single went to number 29 in Belgium, number 10 in Ireland, and number 4 in both France and the UK. I like how the music and lyrics blend perfectly on this one.

"Secret Life" also has an interesting intro/beat-line. It has a classic 60's feel to it in some aspects, fusing Motown melodies with new-wave instrumentals.

And finally, the album ends with "Say Hello, Wave Goodbye", a melancholy song about the awkwardness between a couple after they've broken up. This is one of my favorite songs on the album; the sentiment of the title really works for me along with the whole musical arrangement. As the third single from the album, it went to number 30 in Belgium and the Netherlands, number 29 in Germany, number 12 in Ireland and number 3 in the UK. The song has been covered by a number of artists in the 90's and the new millenium.

While I had some of these tracks on greatest hits CD collection I found in the 90's, I didn't complete my MP3 collection of this album until a few years ago. It was kind of cool being able to "discover" some of the songs I was missing after all these years. It was like a familiar voice from the past on the other end of the phone saying "hello" (but not waving goodbye - these songs are here to stay in my music library).
Posted by Martin Maenza at 4:30 AM