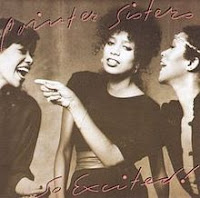 Today (July 11th) we wish a very happy sixty-second birthday to Bonnie Pointer. In 1977, she left the group she founded with her older siblings to pursue a solo career.

This month, the Pointer Sisters also celebrate the thirtieth anniversary of the release of So Excited!, their ninth studio album. Anita, June and Ruth (along with a whole slew of studio musicians) put together a 1982 release that went to number 59 on the US Billboard Hot 200 and number 24 on the R&B charts.


Side one explodes with the high-energy of "I'm So Excited". Upon its original release, it went to number 46 on the US R&B chart, number 30 on the US Billboard Hot 100, and number 28 on the Dance chart. It also appeared in the film Summer Lovers which was released the same month in 1982. In 1984, the song was re-released as part of their album Break Out; this time it peaked at number 9 on the US Billboard Hot 100, and also scored at number 25 on the Adult Contemporary chart. It opens with a very catchy keyboard riff that instantly makes me smile when I hear it. The verses have a swagger to them which mirror the lyrical message of sexual anticipation of the evening ahead. I remember this one playing all over the radio back in 1982 as well as the video on MTV a few years later. The song was a huge dance favorite during my college years when it was re-released thanks to the quick tempo; everyone got out on the floor when it came on.

After a rousing opening track, "See How the Love Goes" downshifts things to a mid-tempo groove. This one too focuses on primal desires as a man pays an unexpected call on a woman. She is willing to see how the scenario he is proposing plays out.

If the first side is taken as a narrative whole, the lyrics to "All of You" suggest the woman is looking for more than just a fling. It is very much about commitment, complete and total.

"Heart Beat", a song about hiding true feelings behind a stoic exterior, bounces along on an up-beat keyboard riff. To close out the story, the woman attempts to convince her lover to let his true feelings show.

Side two opens with "If You Wanna Get Back Your Lady". This third single only climbed to number 67 on the US Billboard Hot 100, number 48 on the Dance charts and number 44 on the R&B charts. It features a very funky groove that is reminiscent of Stevie Wonder's "Boogie On Reggae Woman" from a few years prior. I bet the two would mix well together.

Next up, the sisters perform a cover of Prince's "I Feel for You", which appeared on his 1979 self-titled second studio album. This version sticks with the slower tempo of the original, tweaking the musical accompaniment just slightly. Where the strength of this rendition comes in is that the sisters add their natural harmonies; Prince had to create a similar sound by combining his lead vocals with his own backing tracks. Clearly, the Pointers pay proper respect to the artist on this one.

"Heart to Heart" combines catchy hooks and sweet harmonies in this up-tempo tune. I am kind of surprised this one was not also released as a single because I think it would have done well.

The final track "American Music" was also the album's first single. World-wide, the song charted at number 78 in Australia, number 44 in New Zealand, number 30 in Belgium and number 28 in Canada. In the US, it went to number 23 on the R&B charts, number 16 on the Billboard Hot 100 and number 9 on the Adult Contemporary charts. The lyrics are a reflective look at the music scene of the early 80's. The Pointers embrace the sounds, many of which are built upon a great history of the previous two decades. The song features a couple wonderful saxophone solos.

For the most part, So Excited! sticks thematically to the matters of the heart. However, by looking at things from a variety of angles while mixing up the musical styles nicely, the record never gets to a place of repetition or boredom. The Pointer Sisters had taken what worked for them in the 70's (a jazz and R&B blend) and transitioned well into the 80's.
Posted by Martin Maenza at 4:30 AM