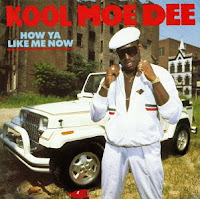 Happy fiftieth birthday today (August 8th) to Mohandas Dewese, better known as American rap MC Kool Moe Dee. The Manhattan native was on the scene in the early days of rap’s formation, working first on the Enjoy Records label and then moving over to Sugar Hill Records.

On December 8th of 1987, he released his second solo album How Ya Like Me Now on the Jive label. The Platinum selling album went to number 35 on the US Billboard Hot 200 and number 4 on the R&B charts.


Side one opens with the title track and first single; “How Ya Like Me Now” went to number 22 on the US Billboard R&B charts. Moe Dee’s raps here go on the attack against LL Cool J. The two rappers had a long standing feud with Moe Dee feeling LL was not giving respect to the elder statesmen of the genre. The cover of the album even shows a red Kangol hat (LL’s trademark clothing item at the time) under the front wheel of the jeep. The track samples James Brown’s 1965 hit “Papa’s Got a Brand New Bag”, giving it an infectious funky groove that is irresistible. Moe Dee even gives props to Brown in the lyrics.

“Wild Wild West”, the second single, went to number 62 on the US Billboard Hot 100 and number 4 on the R&B charts. This one was a huge dance club hit back in 1987. I remember quite well that everyone would hit the floor when those opening whistles, ala a Clint Eastwood movie, sounded out like a warning siren. The repetition of the song title gets your hips and pelvis right into that cowboy squat/saunter rhythm. Lyrically, Moe Dee paints the streets of New York City in the image of the wild, no-holds-barred of the American west of the late 1800’s. I like how he gives a shout out to all of the crew he was hanging out with.

“Way Way Back”, where-in Moe Dee takes the music and raps to the earliest days of the genre, samples the 1972 song “Troglodyte” by the Jimmy Castor Bunch. If you compare it to the earlier two tracks, you can see the evolution of the style in its first decade.

Moe Dee again samples the classics on “50 Ways”, going to Paul Simon’s 1975 hit “50 Ways to Leave Your Lover”. The hooks picked are short but highly effective in building an intriguing track.

“No Respect” includes samples Aretha Franklin’s 1965 classic “Respect”. I like how he turns the original lyrics of the Queen of Soul on their ear for his rap about those who flaunt their money to try and buy respect.

Side two starts with “Don’t Dance”, another challenge rap. This one has a rocking music sample to back Moe Dee’s rapid-fire rhymes.

“I’m a Player” brags about the sexual prowess of the rapper. Once more, the samples get some assist from the Godfather of Soul himself, James Brown.

On “Suckers”, Moe Dee takes on those who would attempt to disrespect him.

“Stupid” slams young and dumb guys who are easily manipulated by attractive women.

“Rock You” borrows the opening percussion of Queen’s “We Will Rock You”, repeating it over again for an ominous beat. I even picked up the “oh yeah” by Prince from “Sign O’ the Times”.

The record closes with the slow meandering “Get Paid”.

I owned a copy of How Ya Like Me Now on vinyl back in 1988; I picked it up shortly after I moved down to Raleigh, NC, to start my first job post-college. This was a brief period where I was getting a lot of rap albums that featured danceable tracks. This one joined the likes of DJ Jazzy Jeff and the Fresh Prince, JJ Fad, LL Kool J, Kid ‘N Play, MC Hammer, Rob Base, Salt-N-Pepa, Vanilla Ice, and Young MC in my music library.

What I like about Kool Moe Dee is that his raps are intelligent and complex, delivered with unwavering confidence and attitude. The music mixes are infectious too, perfect for working it out on the dance floor. The first side opens with a one-two-punch of strong tracks.
Posted by Martin Maenza at 4:30 AM

Email ThisBlogThis!Share to TwitterShare to FacebookShare to Pinterest
Labels: 80's, How Ya Like Me Now, Kool Moe Dee, music, rap