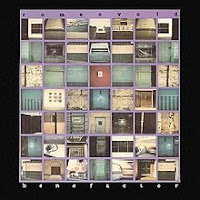 The year of 1982 started out with an EP release from Romeo Void (click here for my review of Never Say Never). The band followed it on August 6th with Benefactor, their second studio album and another thirtieth anniversary release. The record reached number 119 on the US Billboard Hot 200 charts.


Side one opens with an edit version of “Never Say Never”. This was a “clean” version of the song, suitable for general radio airplay. The pounding bass line by Frank Zincavage and searing guitars by Peter Woods immediately pull me into the song. Larry Carter keeps the beat going strong while Deborah Iyall delivers the vocals with plenty of attitude and just the right touch of sarcasm. Benjamin Bossi’s saxophone solo is an 80‘s new wave classic. I doubt I will ever tire of this track; I am as much a fan today as I was back in 1982 when I first heard it on the local college station.

“Wrap It Up”, a track written by Isaac Hayes and David Porter, is next. The Fabulous Thunderbirds released a version as a single in 1986 in their rock-a-Billy style. This version though has a darker edge to it, made cool and mysterious by Bossi’s sax. Iyall changes up the lyrics a bit, substituting the name “Louie” for the word “baby” at the end of each of the verse lines, and replacing the word “box” with “pocket”. The gender spin she provides helps the band make it their own.

“Flashflood” has a steady, mid-tempo beat; Iyall keeps her vocals on an even level to match. Combined together, the whole song washes over you.

“Undercover Kept” was released as a single a follow up single, though it did not garner as much notice as “Never Say Never“. The percussion is sharp and punctuating, giving the track an intriguing sound. This song reminds me a bit of the Waitresses, another early 80’s new wave group that knew how to properly incorporate the sax into tracks well.

“Ventilation”, a steamy sexual encounter, closes out the side.

Side two takes us down to “Chinatown” in a way that only the locals like Romeo Void can do. This one is more a straight-forward rocker.

“Orange” delivers a trippy mid-tempo beat while Iyall delivers a dissertation on self-gratification.

“Shake the Hands of Time” is a conversation between two female friends as one tries to convince the other to move past that guy who just broke up with her.

“S.O.S.” closes the record on a dramatic note as it deals with an alcoholic, abusive father.

The 2006 CD reissue of the album included the four tracks from the Never Say Never EP.

Back in 1982, this one would have been way too deep for me but looking at it thirty years later I can really respect what the band was going for here. Romeo Void’s music is an interesting mix. The music by the guys is complex with layers built in a methodical manner. The lyrics are dark and gritty, like a raw psychic nerve exposed by a probing therapist. And that, for me, is what makes Benefactor such an interesting album to visit.
Posted by Martin Maenza at 4:30 AM

Loved this album! I still crank "Never Say Never" to this day.