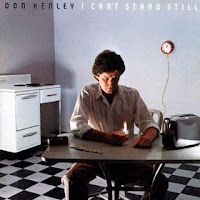 From 1972 to 1980, Don Henley served as the drummer and lead singer for the Eagles. When the band broke up, Henley embarked on a career as a solo artist.

Today (August 13th) marks the thirtieth anniversary of I Can’t Stand Still, his debut solo album from 1982. The Gold selling record went to number 34 in Sweden, number 24 in the UK, number 22 in Norway, number 14 in New Zealand and number 5 in Canada. In the US, it topped out at number 24 on the Billboard Hot 200 chart.


Henley got a number of music greats to work on the album. Some of these include Andrew Gold on keyboards, Louise Goffin (daughter of Carole King and Gerry Goffin) on vocals, three members of Toto (Steve Lukather, Jeff Porcaro and Steve Porcaro), fellow Eagles band-mates (Timothy B. Schmitt, J.D. Souther and Joe Walsh), Ian Wallace (of King Crimson) on drums, Waddy Watchel on electric guitar, Bill Withers on vocals and Warren Zevon on vocals and guitar.

Side one opens with the title track. “I Can’t Stand Still” was released as a B-side of the first single and then later as an A-side for the third single; it stalled at number 48 on the US Billboard Hot 100. Henley co-wrote this slower tempo track with Danny Kortchmar who played a number of instruments on the album including synthesizer, bass, guitars, and keyboards. Kortchmar also co-wrote six of the other tracks as well. This one is about the feeling of seeing a woman you will always love in the arms of another man.

“You Better Hang Up”, while not released as a single, received enough airplay on the Rock stations in the US to rank at number 44 on the Mainstream Rock charts. This one about a long-distance relationship features a more up-tempo, guitar heavy rocking rhythm.

“Long Way Home” was released on the B-side of a couple of the singles from the album (the first, the fourth and the fifth). This one is a lush piano ballad about a failing relationship. I like how Henley stretches the syllable on the word “long” on the chorus.

The fifth and final single was “Nobody’s Business”. Henley co-wrote it with Souther and Bob Seger. It features a mid-tempo guitar/percussion riff that is like a train barreling down the tracks on a moonlit night.

Henley and Souther also collaborated on “Talking to the Moon”. Again, Henley returns to the piano for this gentle ballad about trying to get over a former lover.

Side two starts off with the smash hit “Dirty Laundry”. This second single went to number 59 in the UK, number 51 in Australia, number 7 in New Zealand, number 3 on the US Billboard Hot 100, and number 1 in Canada and on the US Mainstream Rock chart. The lyrics take aim at the tabloid nature of the news at the time; not surprising that these lyrics are just as relevant thirty years later. The percussion and the keyboards on this one at the start really set the tone for the rest of the song. I remember quite well how popular this one was during my senior year of high school from late 1982 to mid-1983; it was one of the tunes they played often at school dances.

“Johnny Can’t Read” was released as the first single from the album; it went to number 42 on the US Billboard Hot 100 and number 29 on the US Mainstream Rock charts. The lyrics cast a light upon the problem of reading illiteracy in young people, a cause Henley raised money for. This is actually my favorite track on the album; I like the bouncy, carnival sounds of the music. Unlike the previous track this one has not gotten overplayed over the decades which gives it a fresher feel.

“Them and Us” was released as the B-side to the third single. The track about nuclear Armageddon features a blues guitar riff.

“La Eile” is a short, less than a minute, instrumental tune written by Irish musician Paddy Moloney of the Chieftans. He even guests on the track, playing the Uillean pipes.

“Lilah” is a country-rock ode that harkens back to Henley’s early days with the Eagles. The lyrics are a message from a dying man who is looking back upon his life.

“The Unclouded Day”, the fourth single, closes the album. This hymn was written by Josiah Alwood and John Kinsey in the 1880’s. Henley brings it back for a new audience here and adds a reggae beat to it.

Back in 1982 and 1983, I am certain many of these tracks were played on the local rock station I listened to occasionally out of Buffalo, NY. Many folks were fans of the Eagles to begin with, so Don Henley’s solo debut was much anticipated and well-received.

I really enjoyed listening to the entire I Can’t Stand Still album again for this review. I only have had a few of the tracks in digital format from greatest hits compilations. As it is not currently available for digital purchase from the usual sources, I went old school and sought out a reasonably priced copy on CD on ebay to add it to my music library.
Posted by Martin Maenza at 4:30 AM