How Do Rumors Get Started: The True Story of Timex Social Club 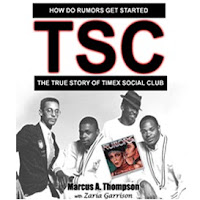 If you were a dance club fanatic like I was during the summer of 1986, one of the songs that you heard everywhere was "Rumors" by the Timex Social Club. So, do you think you know the story behind the song and the start of the group? Well, I thought I did.

Turns out I was totally in the dark.

Marcus A. Thompson, with the help of Zaria Garrison, penned How Do Rumors Get Started: The True Story of Timex Social Club. It was published in late 2011.


Thompson and his fellow Berkeley, California, friends (Michael Marshall, Alex Hill and Kevin Moore) were the foundation of the group. This book, told in an easy-going and straight-up honest way, tells the tale of their instant stardom, life on the road during the summer of 1986, and the ultimate breakdown of the original group in less than a year's time. It is a story of greed, broken frienships and ultimate betrayals.

Thompson definitely puts it all the table here. His stories are honest and relatable. And buried within the good times on the roller coaster ride of fame are also some very valuable lessons for anyone looking towards a life in the music industry. It might have been over twenty five years ago, but I am sure much of this holds true in today's industry.

I found this to be a very quick read; I knocked it out in a couple nights which is pretty fast for me. That is a testament to the writing style and straight-forward narrative. Also included through out are pictures of the guys and of other memorabilia relating to that year as the original group.

The book is available in many formats (traditional paperback, Kindle, eBook) from the usual sources. You can also get it directly from the group's website: Timex Social Club.com.

Note: for a limited time, the publisher is giving away free copies of the eBook. Just email them at: tscbook@timexsocialclub.com.
Posted by Martin Maenza at 4:29 AM