The Time - What Time Is It? 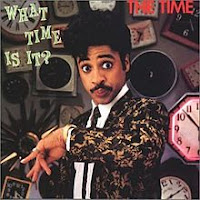 Today (August 25) marks the thirtieth anniversary of What Time Is It?, the second studio album by the Minneapolis R&B and funk group known at the Time.

Building off the momentum from their self-titled debut a year prior, the group’s 1982 effort climbed up to number 26 on the US Billboard Hot 200 and number 2 on the Billboard R&B Album chart. This release too followed the format laid down by their debut, placing six songs total across two sides with a mix of dance jams and ballads. Prince once more had his hand in writing all of the tracks and performing on most of the instruments.


Side one starts with Morris Day exclaiming his catch phrase (which was also the album title) as the opening of “Wild and Loose”. The seven and a half minute track, about having a good time partying, has a tight dance groove with a funky bass line. The girls from Vanity 6 are part of the vocal dialogue in the middle as girls who meet the band after their concert. I like how Morris gets the band chanting for the last minute or so of the song.

“777-9311” was the first single released from the album. It went to number 88 on the Billboard Hot 100 and number 2 on the R&B charts. The album version of this funky phone booty call is a searing eight minutes long. There is an extended bass solo on this one by Terry Lewis. This one definitely features some rock elements in the guitar work thanks to Prince.

“Onedayi’mgonnabesomebody” features a quick-paced percussion and strong synthesizer riff. It is a declaration that they are going to work hard to make a name for themselves and become famous. Despite the closing statement “we don’t like new-wave”, the guys certainly are able to emulate all of its musical elements with ease.

Side two struts in with “The Walk”, the album‘s “dance“ move track. As the second single, this one fell short of the Billboard Hot 100 (it only got to number 104) yet performed decently on the R&B charts (it reached number 24). The album version clocks in at over nine and a half minutes, giving plenty of room to work it out. Again, one of the gals from Vanity 6 is featured in a conversational bridge with Morris.

The final single was the ballad “Gigolos Get Lonely Too”; it only got as high as number 77 on the R&B charts. Morris tries to show his sensitive side on this mid-tempo confessional. Somehow, I don’t think he ever had a problem with lonely nights, do you?

The side and record close with “I Don’t Wanna Leave You”, another mid-tempo groove. I like the piano and keyboards on this one.

My discovery of the Time came from their appearance in Purple Rain in 1984. I instantly liked their sound and songs. Of course, when I later learned that Prince had such a strong hand in these earliest albums as well I definitely had to pick up on them as well. I picked up What Time Is It? first on cassette in the mid-80’s and then a few years ago as digital downloads.

What I find interesting is putting this album up along side Prince’s Controversy from 1981 and Vanity 6’s self-title debut from a few weeks prior to see a full musical puzzle of interlocking sounds. Add to it Prince’s 1999 which would follow in October of 1982, and you have quite a volume of output from his Royal Badness in a single twelve month period.
Posted by Martin Maenza at 4:30 AM