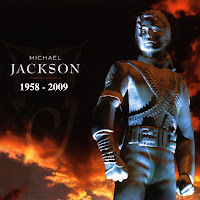 Today (August 29th) would have been the 54th birthday of the late Michael Jackson. His considered by the Guinness Book of World Records as the most successful entertainer of all time. He got his start as a performer in the late 1960's as part of a singing group with his older brothers in Gary, Indiana. Once the brothers were signed to the Motown Record label, their careers skyrocketed.

Whether you are a devout fan or thought his personal life was a bit on the crazy side, there is no denying the music he made over the years will be remembered for decades to come.


Here are links to the album reviews I did for his late 70's/80's offerings. Enjoy.

For ABC, the second studio album from 1970 by the Jackson 5, click here.

For his fifth solo studio album Off the Wall from 1979, click here.

For Triumph, the 1980 studio album by the Jacksons, click here

For his sixth studio album Thriller from 1982, click here.

For his seventh studio album Bad from 1987, click here.
Posted by Martin Maenza at 4:30 AM