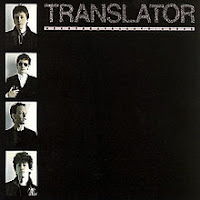 This month marks the thirtieth anniversary of Heartbeats and Triggers, the debut album from the San Francisco based rock band Translator.

Side one opens with “Everywhere That I’m Not”, the debut twelve inch single and most likely their most known track. It has been featured on a couple 80’s compilations that I am aware of. Lyrically, the song tells the tale of a guy who grows increasingly frustrated because the one he wants to be with is no longer in his life. I have always found it clever how the word “impossible” is broken up and sounded out at the start of the chorus.

“Necessary Spinning” opens with a frantic pace that mirrors the lyrics of life out of control quite well. I get dizzy just listening to it.

The band definitely knew we needed a break after the last track, so they slowed things down a bit with “Everything You See”. This one definitely has a 60’s British invasion sound to it., from the jangle of the guitars to the harmonizing on the vocals.

“When I Am With You” was released on the B-side of the twelve inch single. It is about finding someone you can be relaxed and comfortable with.

“Nothing Is Saving Me” has touches of the Doors, especially in the instrumental opening minute and a half. It is a darker, moodier piece. The album title comes from the lyrics of this one.

Side two starts with “Sleeping Snakes”, another track featured on the twelve inch single. The song is against nuclear weapon stockpiling by the countries of the world.

“Favorite Drug” is a hard-driving track about the isolation that comes from substance abuse.

The band pays tribute to John Lennon, one of their big influences, on “Everywhere”. It was written the day after the legendary artist was murdered. I like how some of the music riffs are very Beatles-like.

“Dark Region” is a heavy-toned number about heroin usage.

My Heart, Your Heart” closes the record on a bit of an anxious yet hopeful note.

As can be heard on this record, Translator made solid guitar-based rock music with a lyrical edge. The group explores a number of musical approaches here, pulling each of them off with exact precision. There is no repetition to be found here. Back in 1982, I mostly knew the opening track from listening to college radio. However, that was just the icing on the delicious cake that is Heartbeats and Triggers.
Posted by Martin Maenza at 4:30 AM