Against All Odds (soundtrack) 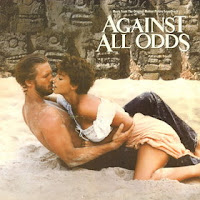 On March 2nd of 1984, director Taylor Hackford released a neo-noir remake of the 1947 film Out of the Past. This new film, entitled Against All Odds starred Jeff Bridges, Rachel Ward and James Woods. Jane Greer, who had appeared in the original film, also had a supporting role in this new movie.


The soundtrack album, which was nominated for a Grammy Award, peaked at number 12 on the US Billboard Hot 200.

Side one opens with “Against All Odds (Take a Look at Me Now)” by Phil Collins. This Academy Award nominated tune was one of the top-selling songs of the year; it spent three weeks at the number 1 spot on the US Billboard Hot 100. Around the world, it also did very well as it hit number 9 in Germany, number 5 in Finland, number 4 in Switzerland, number 3 in Sweden and New Zealand, number 2 in the UK, and number 1 in Canada, Ireland and Norway. The song did win the Grammy for Best Male Pop Vocal Performance in 1985. The lyrics of this ballad have the lead begging a former lover to “take a look at me now” even though he knows that the chance of them coming back together is “against all odds”.

I have very fond memories of this song from my freshman year of college. It was all over the radio at the time as well as a slow dance favorite at many floor parties and bars I went to at the time. The piano and percussion along with Collins’ heart-wrenching vocals made for the perfect love ballad.

Stevie Nicks is up next with “Violet and Blue”. This up-tempo rocker about a break up is quite catchy, with its bouncy keyboards, pounding drums and growling guitars.

Peter Gabriel takes us on a moody, dramatic “Walk Through the Fire”. It is full of big percussion and synths, signature elements of his music during this time period of the 80’s. Released as a single, it peaked at number 69 in the UK.

Next is “Balcony” by Big Country. The lyrics are about going on with the show for a final performance, even if hardly an audience has come to see it.

Mike Rutherford was not “Making a Big Mistake” by contributing this track to the album. I like the opening on this one with the throbbing percussion which mimics a beating heart.

Today (August 12th) also marks the sixty-first birthday of August Darnell, better known as Kid Creole. He and his band the Coconuts close out the first side with “My Male Curiosity”. As a single, it went to number 83 in the UK and number 23 on the US Billboard Dance charts. This one has a swinging Latin rhythm to it with wonderful back vocal harmonies.

The second side of the album is devoted to instrumental tracks from the original film score by Larry Carlton and Michel Colombier.

First up is “The Search” which was the main title theme. It has an ominous back beat with an acoustic guitar melody.

“El Solitario” is a soft piano ballad with gentle synth effects behind it.

“Rock and Roll Jaguar” is more up-tempo with a searing electric guitar.

“For Love Alone” is a slow, sensual number with effects that sound like deep, passionate breathing.

The tempo changes up with “The Race”, a quick tempo rocker to get the feet tapping and the pulse racing.

“Murder of a Friend”, clocking in at over six minutes, closes the album. Again, an acoustic guitar is prominently featured in one of the many movements to this piece.

When it comes to soundtracks, I am not always that fond of mixing tracks by more commercial artists with ones from the instrumental film score. I would rather have all of the former and none of the later. However, at least on Against All Odds they split them up to their own sides. That way, someone like me could listen to the first side but bypass the second. Had I owned this one on vinyl (I don‘t even think I have ever seen the film itself), that is likely what I would have done. In today’s digital world, I would definitely seek out the first six tracks (I already have the ones by Phil Collins and Kid Creole) if I could get them separately. Unfortunately, in all sources I have for digital downloads, it is all or nothing with this soundtrack. Ah well.
Posted by Martin Maenza at 4:30 AM