Flash and the Pan - Headlines 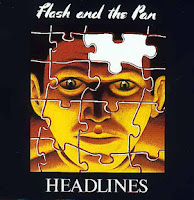 This month marks the thirtieth anniversary of Headlines, the third studio album from the Australian band Flash and the Pan. The group consisted of Harry Vanda (lead guitars, vocals) and George Young (lead vocals and keyboards) who were part of the Easybeats in the 1960’s, Les Karski (bass) and Ray Arnott (drums). Stevie Wright, the vocalist of the Easybeats, guests on two of the tracks.


Side one opens with the thumping bass of “Jetsetters Ball”. Combined with the synth feedback, this one has a bit of a classic Pink Floyd feel to me. The song looks at the wild side of the nightlife of the rich and famous.

“Don’t Vote” has a guitar heavy, boogie rhythm to it. I like the energy on this one.

“Waiting for a Train”, the third single from the album, went to number 7 on the UK charts in 1983. In Australia, the original version went to number 98, but a later French version scored higher at number 66. The song was used in Guy Richie’s 2008 crime drama film RocknRolla. This one has a bit of a Calypso beat to it but also comes with a rich synthesized string section as well.

“War Games” comments on the military and the life of soldiers after they’ve returned home. The composition really has a number of different musical movements, mashed together to present a conflicted mosaic, that work well together.

“Where Were You”, the second single from the album, closes the side. It has a swaying dance tempo to it that counters the lyrical accusation of the lack of mutual support. I like the backing vocal harmonies that the guys achieve here.

Side two begins with “Love Is a Gun”, the first single from the album. Karski delivers another killer bass riff on this one.

“Up Against the Wall” is a more introspective track. This plays right into Young’s vocal delivery style which is often more spoken-word rather than singing.

“Psychos on the Street” sounds like one of the tracks where Wright guested as the vocal style here is a departure from Young’s.

“Hey Jimmy” is a dramatic number about two roommates at a crossroads Jimmy has a problem with living his life out of control. It is a tough-love message.

The album closes with “Phil the Creole”, the tale of a former hitman for hire whose retirement is interrupted by someone seeking vengeance. It has a rollicking piano rhythm mixed with heavier guitars. The combination actually works well.

I mostly knew Flash in the Pan from their 1979 single “Hey, St. Peter” from their self-titled debut album. It wasn’t until 2009 when I was looking for things to download from emusic.com when I stumbled upon a compilation by the group. Taking a chance, I downloaded it which included a trio of the tracks from Headlines.

Listening to the whole album for the review (thank you, grooveshark), the tracks I currently do not have impressed me greatly. They made me want to go and download the album. But, guess what? It is not on any of my usual sources (iTunes, Amazon, emusic). It turns out that even on eBay you can only get it on vinyl or cassette. CBS Records released it on CD once back in 1988 but clearly it is long since out of print. It is that rare of a record. All I can hope is that it some day makes a resurgence in the digital world.
Posted by Martin Maenza at 4:30 AM

Was it really that long? Wow. (Note: in 2012, the German reissue label Repertoire [repertoirerecords.com] reissued both Headlines and Early Morning Wake Up Call on CD.)