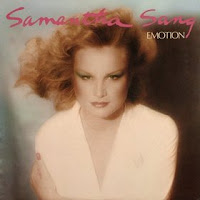 Welcome to another edition of Seventies Saturday. And today we wish a very happy sixty-first birthday to Australian singer Samantha Sang who will be celebrating tomorrow (August 5th).

Beginning her career at age eight on Australian radio, Sang was signed by Robert Stigwood in 1969 at the behest of the Bee Gees. Barry and Maurice even co-wrote her song “The Love of a Woman”.


In 1977, she visited the Bee Gees in France where they were recording songs for Saturday Night Fever. That encounter turned into another song for her, which was released on the 1978 album Emotion. Fueled by the title single, the album went all the way to number 29 on the US Billboard Hot 200.

Side one starts with “You Keep Me Dancing”. As the second single from the album, it peaked at number 56 on the US Billboard Hot 100. Sang’s breathy vocals deliver the verses, accompanied by a mid-tempo disco groove. It is on the chorus though that the singer’s voice rings out.

In 1974, the Bee Gees released the ballad “Charade” as a single from their album Mr. Natural. Sang’s version is sultry and intimate, like pillow talk between lovers.

The Gibb penned title track “Emotion” also featured vocals by brother Barry. Though originally intended for the Fever soundtrack, Sang’s version instead was used for the 1978 Joan Collins’ film The Stud. The single went to number 11 in the UK, number 2 in Australia, and number 3 on the US Billboard Hot 100. I have been a fan of this song since the first time I heard it back in 1978 on the radio; nearly three and a half decades later it still remains a four-star favorite of mine. Just listening to it takes me back to when I was thirteen years old, listening to the radio with my headphones on in my darkened bed and letting those rich strings carry me away.

“Change of Heart” was written by Eric Carmen and appeared on his 1978 album of the same name; Sang provided backing vocals on his Top-20 hit version as a return favor for getting to record the song. Hers slows down the tempo a bit and goes for a more airy quality to the music. She definitely provides a different spin to this familiar tune.

Sang continues with the mid-tempo ballads on “Living Without Your Love”.

Side two begins with “La La La - I Love You”, a cover of the Delfonics 1968 song “La-La (Means I Love You)”. Again, Sang takes a very familiar song and slows it down successfully to sing in her seductive style.

“But If She Moves You” returns things back to a mid-tempo beat for slow swaying on the dance floor. The lyrics tell of a woman willingly releasing a man to another woman who he finds he loves more.

“When Love Is Gone” was penned by Francis Lai, Paul Evans and Brian Wells. The ballad has a gentle piano/keyboard accompaniment that allows Sang’s strong voice to take center stage.

“I Don’t Wanna Go”, written by Bruce Roberts and Carole Bayer-Sager, was first recorded by the Moments in 1976. Sang takes the tune that hit number 17 on the US Billboard R&B chart and gives it a bit more of a pop flavor. There is even a flute solo on her version.

The album closes with a remake of the Gibb penned “The Love of a Woman” which she first recorded in 1969. Sang moves easily between a falsetto and a more powerful lower register.

Emotion is very much an easy-listening album despite the fact that the title track was a disco favorite. And though the record features a number of covers, Samantha Sang does a good job re-interpreting them to suit her vocal skills.
Posted by Martin Maenza at 4:30 AM