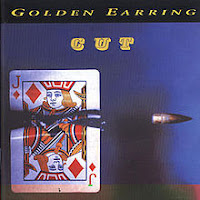 This month marks the thirtieth anniversary of Cut, the group's sixteenth studio album. This summer of 1982 release climbed all the way to number 24 on the US Billboard Hot 200; in the Netherlands it became their fifth studio album to reach the number 1 spot on the charts.

Side one begins with "The Devil Made Me Do It". As the second single from the album, it did chart on the US Billboard Hot 100 at position 79; in the Netherlands it reached number 15. The lyrics of this up-tempo track are about a man on trial for committing crimes in the name of love. The big, blasting horns fit well with the swinging rhythm.

"Future” is a good mid-tempo rocker; I like the music well enough even though the lyrics really don’t engage me much.

The tempo continues to slow with "Baby Dynamite", a song about a woman moving on to a new life.

"Last of the Mohicans" brings back the rock to close the side. The lyrics speak to taking pride in one’s legacy and heritage. The backing rhythm has hints of “the Peter Gunn Theme” to it in spots.

Side two opens with "Lost and Found", a song about the underlying respect that is needed in a relationship. People cannot be treated like objects.

"Twilight Zone" was the breakout first single from the album. In the US it went to number 10 on the Billboard Hot 100 and number 1 on the Mainstream Rock charts; the song went all the way to number 1 in the Netherlands and to number 12 in Canada. Kooymans wrote the song after taking inspiration by Robert Ludlum's novel The Bourne Identity. The album version of the song, clearly the highlight of the record, is nearly eight minutes in length. This gives Golden Earring plenty of room to work out the jam and to create an 80‘s classic masterpiece. I can remember fondly the music video for this one playing on MTV in all of its glory; it really helped with the song’s popularity and moved some album sales to boot.

After an epic, dramatic track, "Chargin' Up My Batteries" pulls things back to a more personal level as the singer takes time to prepare for the future to come.

The tribal drumbeats that end the previous track spill right into those of the final track "Secrets". This one is about how deceptions between lovers can tear things apart.

Having been around since 1965 (the year I was born), Golden Earring kept a pretty steady popularity in their native land. But outside of Europe they were mostly known for their other big hit, 1973’s “Radar Love”.

Overall, I found this album to be okay with a few tracks that a bit more catchy and memorable than others. I honestly don’t recall any of the cuts from Cut outside of “Twilight Zone” playing much on the local rock station. It is likely that huge hit overshadowed the rest of the songs. That will happen sometimes.
Posted by Martin Maenza at 4:30 AM