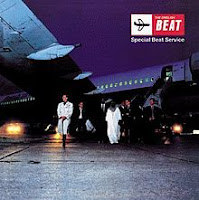 This month marks the thirtieth anniversary of Special Beat Service, the third and final studio album from the British Ska band the Beat. The August of 1982 release went to number 21 in the group’s native UK; in the US where the group was known as the English Beat it went to number 39 on the Billboard Hot 200.

Side one opens with “I Confess”, the third single. It went to number 54 in the UK and number 34 on the US Billboard Dance chart. I am a huge fan of this song (a four-star in my music library); it is easily my favorite track by the group. From the opening piano melody by Dave Blockhead, I am instantly in a more up-beat mood whenever I hear it. Dave Wakeling’s vocals soar to great heights and are perfectly supported by Saxa’s saxophone performance here.

The second single “Jeanette” went to number 45 in the UK. The tempo on this ode to a lovely lady is a quick-step, one-two bounce. It features Jack Emblow on accordion.

The horn section is in full force on “Sorry”, with trombone by Vince Sullivan and trumpets by Dave Lord and Steve Sidwell.

The next track “Sole Salvation” was used for the B-side of the third single. Wakeling’s vocals on the chorus again reach for those angelic heights while the rest of the song has a bit of a 60’s soul feel.

“Spar Wid Me” is the first track on the album that harkens back to the band’s earlier Jamaican Ska style. Andy Cox plays the mandolin on this one while Blockhead provides the organ sounds on the keyboards. Listen to this one on your headphones and enjoy at how Ranking Roger’s laughter bounces from channel to channel at the end.

An instrumental version of “Rotating Heads”, under the title “March of the Swivelheads” was released as a B-side for the second single and used at the end of Ferris Bueller’s Day Off in 1986. The song has a quick tempo that lends itself well to a bouncing dance style on a crowded dance floor.

Side two starts with “Save It for Later”, the first single from the album. It went to number 47 in the UK and number 58 on the US Billboard Dance chart. This is my second favorite track on the record; I really like the combination of the guitars and percussion on this one. Everett Morton lays down a great beat for dancing, which I remember doing a number times to this song during my final high school year and first years of college.

“She’s Going” takes us back to the island rhythms, countering a tale of abandonment with an up-beat melody and tempo.

“Pato and Roger a Go Talk” features the toasting talents of Ranking Roger and Pato Banton. Their harmonies are infectious and soon have me bouncing my head right along with them.

“Sugar and Stress” is one of the few songs on this album that have a topical spin to them. Here the band points out how the world has gone upside with vices and greed.

“End of the Party” lightens things up with a light, airy melody that features Blockhead on the piano. The lyrics though tell of the end of the line of a relationship, with one last moment of intimacy before walking out the door.

“Ackee 1-2-3” was the final single, released in 1983 along with the compilation What is Beat?. It charted in the UK at number 54. Yes, the festive song opens with a clucking chicken and closes with a barking dog. You don’t get that in just any song now, do you?

I first discovered many of these songs on the local college radio station I listened to and then through videos on MTV. My older brother owned a copy of this album on vinyl back in 1982. When he came home from college, I made a copy of it on cassette so I could listen to it myself when I went off to college a year later.

Special Beat Service is a strong album from start to finish and a fitting closing chapter for the Beat as a unit. I like the record a lot and have listened to it over a half dozen times in the past eighteen months alone (thanks iTunes statistics).

For my review of the group's first album I Just Can't Stop It from 1980, click here.

For my review of the group's second album Wha'ppen? from 1981, click here.
Posted by Martin Maenza at 4:30 AM