Steve Winwood - Talking Back to the Night 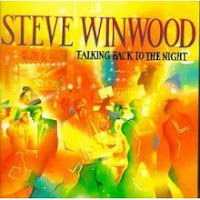 Today (August 2nd) celebrates the thirtieth anniversary of the release of Talking Back to the Night, the third solo studio album from Steve Winwood. This record continued his chart momentum in the UK started with his self-titled debut and its follow up Arc of a Diver (click here and here for my reviews of those two albums respectively); it went to number 6 on the UK charts. In the US, the album stopped its climb at number 28 on the Billboard Hot 200.

Winwood played all instruments on the album and co-wrote the tracks with Will Jennings; Winwood did the music and Jennings did the lyrics. His first wife Nicole, who he was married to from 1978 to 1986, provided backing vocals.

“Big Girls Walk Away” is very much entrenched in the synth sound of the early 80’s, including electronic background vocal distortions.

“And I Go” has a more classic soul sound to it, with a laid back beat and gentle bass accompaniment.

The slower tempo continues with “While There’s a Candle Burning”, another song about the open possibility of reconciliation. Where there is light, there is hope.

The side closes on a more up-tempo beat. “Still in the Game” was released as a single in 1982; it went to number 47 on the US Billboard Hot 100 and number 8 on the Mainstream Rock charts.

Side two starts with “It Was Happiness”, a reflective tale of a couple’s courtship from European cities like London and Paris to a move to California.

“Help Me Angel” is a mid-tempo plea for assistance. It has a pleasant enough beat to it but a little more variety to the overall composition would have helped. Either that or shortening it as it gets repetitive by the time five minutes have gone by.

“Talking Back to the Night” was not released as a single in 1982; however in 1988 the remixed version went to number 57 on the US Billboard Hot 100, number 17 on the Mainstream Rock chart and number 7 on the Adult Contemporary chart. The music on this one is a bit darker and foreboding, providing a contrast to many of the tracks that come before it.

“There’s a River” closes the album with slowly meandering Gospel-like number. I think I would have liked it more if it built up to a big, powerful ending. Sadly, it leaves me disappointed.

Overall, Talking Back to the Night is for the most part a very mellow album with a few sparks of higher energy at the start. Back in 1982, it definitely would not have hit my music radar at all for it was too laid back and way too full of introspection. I was not at that point in my life at all. Even today, though, I have a hard time really getting into this one.
Posted by Martin Maenza at 4:30 AM

Email ThisBlogThis!Share to TwitterShare to FacebookShare to Pinterest
Labels: 80's, music, Nicole Winwood, Steve Winwood, Talking Back to the Night, Will Jennings