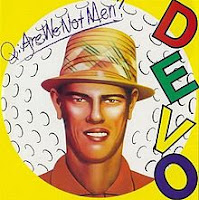 Welcome to another edition of Seventies Saturday. Today (July 14th) is the sixtieth birthday of Bob Casale, guitarist and keyboardist for the Akron, Ohio, new-wave band Devo.

Gerald Casale was attending Kent State University in the late 1960's along with Bob Lewis; they both knew people killed in the May 4th, 1970, shootings on that campus. They felt that event marked a devolution in societal ways. A few years later, they formed a band with brothers Mark and Jim Mothersbaugh, and Gerald's brother Bob. By the time group, who called themselves Devo, signed to record an album, Alan Myers replaced Lewis on drums.


On August 28th, 1978, the group's debut Q: Are We Not Men? A: We Are Devo! was released. Brian Eno of Roxy Music had heard their demo tapes a few years earlier and decided to produce the record. The album went to number 78 on the US Billboard Hot 200, number 57 in Australia, number 12 in the UK and number 7 in New Zealand.

Q: Are We Not Men? A: We Are Devo! appeared as one of the best albums on the Village Voice's Pazz & Jop critics poll that year, and the Trouser Press also listed it as one of the best of the year. Years later, it appeared on the "1001 Albums You Must Hear Before You Die" list and on Rolling Stone's "The 500 Greatest Albums of All Time" (at number 447).

Side one opens with "Uncontrollable Urge". It shares many traits with early punk music: driving guitars and beats, and angry lyrics delivered in an exclaimed manner. However, the keyboards add an element too of tech, making it a more evolved take on the genre.

Next up is a cover of the Rolling Stone's 1965 hit "(I Can't Get No) Satisfaction". Devo recorded their version song in 1977, where it went to number 98 in Australia and number 41 in the UK. The pile-driver rhythm and the emotionless vocals put it in a detached, mechanical state. One thing I have always liked is the over-extension of the repetition of “baby-baby” at the end of the second verse; it is as if the record is skipping but it is not.

"Praying Hands", with its lively synths at the start, takes a poke at organized religion and its ritualistic nature.

"Space Junk" tells the tale of Sally who is struck down by falling debris from outer space. The song makes it a point to indicate this could occur any place in the world at any time.

"Mongoloid", the first single ever from the band, was released in 1976. It is a song about a man who continues to lead a normal life despite having Down syndrome. Opening with a bass solo, the rest of the group joins in. What is somewhat cool is that there are double vocals going on at the same time here, by both Gerald and Bob Mothersbaugh.

"Jocko Homo", the first single from the album, went to number 62 in the UK. The song has served as an anthem of the band, with lyrics that take a sarcastic view at the failings of humanity. Mark Mothersbaugh has told that the song was inspired a bit by the 1932 film Island of Lost Souls, an adaptation of H.G. Wells’ Island of Doctor Moreau; the line “are we not men?” comes from the film’s dialogue.

Side two starts with the experimental cacophony of "Too Much Paranoias". The group borrows a bit from a popular Burger King jingle from the time and makes reference to other commercials as well.

"Gut Feeling / (Slap Your Mammy)" is an amalgamation of two tunes. The first part has an extended instrumental opening that sounds like the Doors spent a day at the beach. The later half is a rapid-fire, under-a-minute punk explosion.

The second single from the album "Come Back Jonee" hit number 60 in the UK. It is a modern spin on the classic tale from Johnny B. Goode about a guy buying a guitar and taking off to be a big star. Tragically, though he died in a head on car crash.

I have to admit that I really don‘t get the point of the lyrics of "Sloppy (I Saw My Baby Gettin')". The song has a catchy musical riff though.

The album closes with "Shrivel-Up", a quirky number about the eventualities that everyone faces as they grow older.

At the time of this release, I was not listening to any stations that were likely to be playing Devo. I think they might have come off a little too out-there for the local album rock station out of Buffalo. And at age thirteen, I had not yet discovered the nearby local college station. No, at this time of my life I was very much into the pop Top 40 sounds and the dance beats of disco.

As a more mature listener, I can appreciate what the band was going for on this debut album. It represents an interesting experiment of styles and sounds. My favorite track is the cover of the Stone’s classic.
Posted by Martin Maenza at 4:30 AM

Thanks for that Devo-lutionary look at the band with your blog post. :)