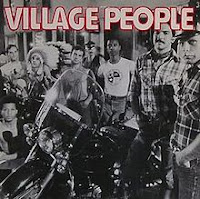 Happy fifty-eighth birthday today (January 12th) to Felipe Rose, a founding member of the disco group Village People. While part Puerto Rican on his mother’s side, the Indian attire he wears while performing is in honor of his Native American heritage on his father‘s side.

Village People was the creation of Jacques Morali, a French composer. Having penned a few dance tunes in the late 1970’s, he approached singer/actor Victor Willis to record them. The songs did very well, particularly in the gay disco scene.


From there, they put together a group for live appearances in clubs and on shows like American Bandstand. The idea was to dress them all in macho occupational costumes that were often worn by the gay men of Greenwich Village; the group got its name from that New York City neighborhood as well. First to join was Felipe Rose who already dressed the part while bartending. Willis (dressing as a cop) recruited his friend Alex Briley (who would be the soldier). Soon Mark Mussler (their first construction worker), Dave Forrest (their first cowboy) and Lee Mouton (their first leather man) completed the initial line-up. Over the decades, the line-up has changed a bit with a few of the founders being permanent mainstays.

Side one opens with the five-plus-minute “San Francisco (You’ve Got Me)”. This first single from the group went to number 102 on the US Billboard Hot 200, number 15 in Australia, and number 45 in the UK. The dance track, a celebration of the free-spirited and open-minded attitudes of the residents of the California city by the bay, has a classic disco sound with pulsating beats and blaring horn sections.

Also clocking in at five-and-a-half minutes is “In Hollywood (Everybody is a Star)”, another ode to a west coast locale where people often get caught up in the glam and the glitz. The chorus hook on this disco groove is very catchy and fun.

Side two begins with the nearly six-minute “Fire Island”. With this side of the album, the group is back in New York at the outer barrier islands near Long Island. The song celebrates a place where many people from the city would go for a quick getaway. The lyrics name-drop a number of nightspots on the island like the Ice Palace, the Sandpiper, the Blue Whale and the Monster; they also warn about going in the bushes (where you might get grabbed or might get stabbed).

The final track is the mid-tempo “Village People”, the second single from the group and another nearly six-minute dance groove. This song calls to arms all the village people out there, to stand as one for the freedom to be who they want to be. It can be interpreted very much as a gay-pride anthem, probably one of the first in pop music.

My love of disco music is no secret. My first dance was a disco themed one in the gym after school while I was in seventh grade in 1977, just about the time Village People came out. I can recall learning the Bus Stop that day as well as doing the Hustle and more. It was all a lot of fun and a great workout.

Thirty five years later, I feel the same way when I listen to records such as this one. The dance beats are hypnotic and transport me to a place where people are dancing their cares away and just having a good time.
Posted by Martin Maenza at 4:30 AM