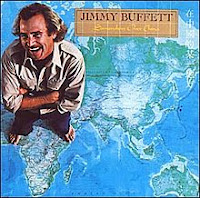 In January of 1982, American singer-songwriter and entrepreneur Jimmy Buffett released his eleventh studio album. Somewhere Over China, the last album Buffett did with producer Norbert Putnam, went to number 31 on the US Billboard Hot 200 chart and number 43 on the Canadian album charts. This month it celebrates its 30th anniversary.


Side one opens with the track that would be the second single from the record. “Where’s the Party” was co-written by Buffett and American folk singer Steve Goodman along with Bill LaBounty. The song opens with a slow, wistful tempo and a haunting harmonica by Greg “Fingers” Taylor. The lyrics tell the tale of a lonely guy with no one in his life and no place to go.

The first single, also co-written with Goodman, was “It’s Midnight and I’m Not Famous Yet”. The more up-tempo track reached number 32 on the US Billboard Rock Tracks chart. The electric guitars by Josh Leo and Barry Chance give this story of the night of a high-roller a more rocking groove. The Reeferettes (Florence “Bambi” Warner, Christian Bachellier, and Deborah McColl) provide the showgirl backing vocals.

Buffett collaborated with his keyboardist Michael Utley on “I Heard I Was In Town”, a somber song about a homecoming. The lyrics are full of introspection and a touch of sadness.

“Somewhere Over China” has a very fitting oriental sound to it. The lyrics continue the pensive theme of the record as a world-traveling man puts his life in perspective.

Side two starts with “When Salome Plays the Drum”, a track with a slight samba rhythm to it. This track falls into the tropical atmosphere that Buffett is known for as the music brings up images of a steamy island night of romance.

Buffett and Utley collaborate again on “Lip Service”, a bouncy little number with a bit of a throwback sound to it. It really spotlights Utley’s magic fingers on the piano.

“If I Could Just Get It on Paper” takes on a more traditional country sound with the inclusion of Hank De Vito on the Pedal Steel guitar and more of Taylor on harmonica. Buffett laments on events of the past and wrestles with getting them written down. I especially like the line “life and ink they run out at the same time or so said my old friend the squid”.

The album closes out with a cover of the 1940’s standard “On a Slow Boat to China” which was written by Broadway composer and lyricist Frank Loesser. Over the decades it has been recorded by such artists as Rosemary Clooney, Ella Fitzgerald, Liza Minnelli, and as a duet by Bette Midler and Barry Manilow. Buffett and his Coral Reefers dance along on this classic with nimbleness and sophistication.

For me, Somewhere Over China is definitely a transition record for Jimmy Buffett. Having been in the business for over a decade at this point and seeing the changing face of the popular music scene (thanks to the advent of the concept of music videos and such), these songs seem to suggest someone at a crossroads, caught between a past and an uncertain future. It makes for a very mellow, very thoughtful album, and perhaps one that many folks could relate to if facing a similar time in their own lives. The high school me of 1982 when this was released most likely wouldn’t have appreciated it; the middle-aged family man me now certainly can though.
Posted by Martin Maenza at 4:30 AM