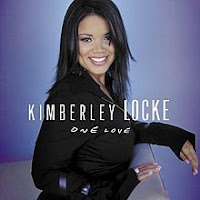 In 2003, American Idol was starting its second season, which happened to be the first full season of the show I actually watched. There was a lot of talent in that years top 12 including a singer from Hartsville, Tennessee, by the name of Kimberley Locke (who just happens to be celebrating her thirty-fourth birthday today - January 3rd).


Locke managed to beat out all the other female contestants that season and made it to third place along with Clay Aiken and Ruben Studdard. Following the show she was signed to Curb Records and in 2004 released her first studio album One Love. The record debuted at number 16 on the US Billboard Hot 200 with sales of over 56,500 copies. It also generated a number of singles. Locke was listed as co-producer on the release along with Bryan Stewart.

The album opens with the first single “8th World Wonder” which went to number 19 on the US Billboard Top 40, number 16 in Canada and number 49 in the UK. The song spent a total of 20 weeks in the Billboard Hot 100. The song opens with a synth-pop chord and builds to a powerful chorus; the lyrics rank the joys of a new, budding week-old love affair to the great wonders of the world.

“Have You Ever Been in Love” continues with the mid-tempo pace and focus on that most powerful emotion. It has a surprisingly hard rocking guitar riff to it on the chorus.

“Wrong”, the album’s second single, went to number 39 on the US Billboard Top 40. This one is my favorite of the tracks on this record. It has a funky, R&B dance groove and plenty of assertive attitude in the vocals. If you’re looking for an anthem of female empowerment, this one will do just fine.

“I Could”, the final single from the CD, went to number 8 on the US Adult Contemporary and number 18 on the Canadian Adult Contemporary charts. This one is a bit softer and sensitive as the singer decries living a life as a lie just to make a relationship work.

“Without You” is a duet that features Clay Aiken. The two had become close friends and briefly roommates because of the show; their voices compliment one another well on this track.

“It’s Alright” kicks things back up-tempo with a funky tale about life choices and moving on despite what others might think. I love the effects of the backing vocals on this one a lot.

Though released world-wide, “Coulda Been” only reached number 90 on the UK charts. The track has an urban, trip-hop rhythm to it. The lyrics talk of how a relationship could have been the right one had the guy not missed the opportunity.

The tempo slows down again with “Before”, a sweet, reflective song about how the singer’s life changed when that right person came into her life. Locke’s gentle vocals really sell the song well.

The one song on the record that Locke shares co-writing credits on is “You’ve Changed”. This one has a 70’s soul vibe to it, from the rhythm guitar and drumbeats to the backing vocals and horns.

Next is “Now I Can Fly”, another smooth, R&B groove.

“I Can’t Make You Love Me” was a 1991 hit for Bonnie Raitt. Locke performed the song on week 10 of the Idol competition that year as part of country/rock week. The rendition on the album has a bit more of an urban feel to it with short percussive beats and soulful keyboards.

The final track on the album is “Somewhere Over the Rainbow”, the 1939 signature song of Judy Garland. Locke performed it as part of her auditions for American Idol so it is a fitting track to close out her first release. Again, the song gets a more contemporary rhythm and arrangement, making this classic fresh and funky.

Having been a fan of Kimberley Locke during her season run, it was a no-brainer for me to pick up her One Love CD the week it came out in May 2004. I found it to be an enjoyable collection of songs with strong melodies and pleasant vocals.
Posted by Martin Maenza at 4:30 AM