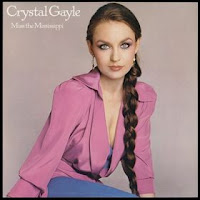 In the fall of 1979, Crystal Gayle released her seventh studio album. Miss the Mississippi reached number 3 on the US Country charts and number 6 on the Canadian country charts; it also crossed over and made it to number 36 on the US Billboard Album chart.


Side one opens with the huge hit “Half the Way”, an up-tempo song with a soft-rock sound to it. She delivers her plea for a more complete, fulfilling relationship with such emotion and conviction. The single reached number 2 on the US Hot Country charts, number 9 on the Adult Contemporary charts and number 15 on the Billboard Hot 100. I’m a fan of this song having heard it a lot on the radio in 1979 and often find myself singing along with the chorus.

“The Other Side of Me” is a pop song originally written by Neil Sedaka and Howard Greenfield in 1973. Her rendition of the tune has a simple piano accompaniment for most of nearly four minutes, letting Crystal’s vocals carry its message.

With the next track “Room for One More”, Crystal moves back to more of her country roots. The melody is more relaxed and carefree, with a sound as inviting as the lyrics.

The slower tempo continues with “Don’t Go My Love”, another plea by the singer to the man in her life. While the sentiment might be similar to earlier songs, Crystal’s beautiful vocals keep things refreshing and interesting.

The opening notes of “Dancing the Night Away” remind me a bit of an old Elvis song. It then spins off into a gentle two-step dancing number. I get the image of couples swaying across a wooden floor in a honky-tonk club.

Side two begins with the single “It’s Like We Never Said Goodbye” which is a bit more soft-rock with its swaying, mid-tempo rhythm. The song went to number 63 on the US Billboard Hot 100 and number 17 on the Adult Contemporary Charts. For the week in April 1980 that it reached number 1 on the US Hot Country chart, all five songs in the top 5 were by female artists (a historic moment).

“The Blue Side” reached number 8 on the US Hot Country charts, number 16 on the Adult Contemporary charts, and number 81 on the Billboard Hot 100. This one has a bit of a jazz/blues feel to it thanks to the gentle piano and subtle but supportive horns.

The tempo picks up again with the bouncy “A Little Bit of the Rain”. This one gets my heel tapping with its sassy swing.

Dave Loggins penned “Danger Zone”, an up-tempo track with a very danceable beat. You can almost feel the heat of passion as the tempo builds. This song rocks and is definitely my favorite of the non-single tracks.

The side and album ends with the pleasant tones of the ballad “Miss the Mississippi and You”. The song is full of longing and loneliness.

I can remember fondly the late 70’s and Crystal Gayle appearing on a number of variety shows as a guest. I also can recall hearing her songs played on the Top 40 radio stations that I listened to at the time. I think the very nature of crossover music that was so prevalent on 70’s radio is part of the reason why I listen to and enjoy so many different genres of music today. Even within the ten tracks on Miss the Mississippi the listener gets a variety of sounds. While Crystal is known as a country artist she manages to cover a lot of musical geography on this album.
Posted by Martin Maenza at 4:30 AM