Gang of Four - Another Day, Another Dollar 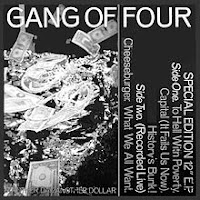 The Gang of Four consists of four musicians from England: Dave Allen on bass guitar, Hugo Burnham on drums, Andy Gill on guitar, and Jon King on vocals. The group was known for their raw mix of punk rock, funk and reggae styles with lyrics focused on problems in society and politics.

In January of 1982, Gang of Four released a five song EP in between their second and third full length studio albums. Another Day, Another Dollar went to number 192 on the US Billboard Hot 200 charts.


Side one consisted a three new tracks.

First up is “To Hell With Poverty!” which went to number 38 on the US Billboard Dance Club singles chart. The song charted again eight years later in 1990, this time going to number 100 on the UK singles chart. The track opens with Gill’s guitar generating a lot of feedback. Burnham’s drums cut in though and temper the squeal with a decent beat. The lyrics, what little there are, take a defiant stance against economic hardship. I can definitely see why this one did well in the dance clubs as it moves quite well.

The economic theme continues with “Capital (It Fails Us Now)”, a tune about spending beyond one’s means and ending up in dire financial straits. Again, we have another solid beat with very funky guitar riffs.

The musical tone shifts a bit on “History’s Bunk!”, moving to a more industrial rock sound. That makes the song a bit more cold and distant for me. Lyrically, I don’t connect to it either.

The second side of the album features two live tracks from the group’s second album Solid Gold. Both songs were released the year prior as singles.

“Cheeseburger” is a commentary on economic times, the challenges of making a living and getting by. The driving rock sound is supplemented with audios that would be heard in a fast food restaurant. The final minute or so is heavy drum beats and wailing guitars, pounding out the passing time.

“What We All Want” opens with a guitar solo quickly joined by the drums and bass. The effect is a hypnotic chant. The lyrics tell of a person lost and aimless, looking for meaning and purpose in his life.

When I previously reviewed a Gang of Four album (click here for my review their 1979 debut Entertainment!) I mentioned that I wasn’t a huge fan. This band is a bit more alternative than I typically prefer. I like some of the songs on their records but not really complete albums. However, Another Day, Another Dollar does work for me though for the most part, most likely because the EP only has five songs (a bearable number for me) and they all tie together in a tight narrative theme.
Posted by Martin Maenza at 4:30 AM