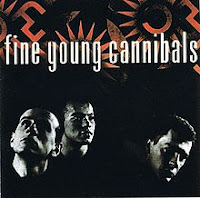 Happy fifty-sixth birthday today (January 25th) to Andy Cox, guitarist and one of the founding members of the Beat.

In 1985, Cox joined fellow Beat member David Steele (bassist and keyboardist) and singer Roland Gift to form Fine Young Cannibals. On December 10th of that year, they released their first studio album, the self-titled Fine Young Cannibals. The record reached number 11 in the UK and number 49 on the US Billboard Hot 200.


Side one opens with “Johnny Come Home”; as the first single the song went to number 16 in Canada and Germany, number 14 in Australia, number 13 in New Zealand, number 10 in the Netherlands, number 8 in Belgium, Ireland and the UK, number 76 on the US Billboard Hot 100, and number 9 on the US Dance charts. With its mix of ska and rock, it tells the tale of a young runaway alone in the big city and the pleas of his family for him to return to them. The rhythm between Cox’s guitar and Steele’s bass on this one is very hypnotic and the saxophone solos very smooth.

“Couldn’t Care More” has a haunting sound as Gift’s voice plays beautifully off the organ played by Cox. Jenny Jones assists on this track with drums and backing vocals. The lyrics present the picture of a person indifferent of all the senseless deaths and violence in the world; it is a sad commentary on those who don‘t care what is happening outside of their own backyard.

Next up is “Don’t Ask Me to Choose” with its guitar riff. The lyrics tell of a man whose girlfriend does not agree with something he must do. He pleads with her, telling her to not ask him to choose between her and what he must do.

The final single “Funny How Love Is” was the worst performer, barely making it to number 97 in Australia, number 58 in the UK, and number 27 in Ireland. The song is about a couple who has broken up, and how the man is moving on with his life after being left. I like that the track has a bit of a 60’s jazz sound to it, in part thanks to Saxa, another former member of the Beat, as guest saxophonist.

Elvis Presley first had a hit with “Suspicious Minds” in 1969. As the third single, this cover went to number 37 in Germany, number 22 in Belgium, number 21 in Canada and the Netherlands, number 14 in New Zealand, number 9 in Ireland, number 8 in the UK, number 6 in Australia, and number 23 on the US Dance charts. Jimmy Sommerville of Bronski Beat assists on the backing vocals here. This is a favorite of mine as I think the guys capture the spirit of the original and yet make it their own; I love Gift’s vocal inflections (which I often mirror when I am singing along to this one).

Side two begins with “Blue”, the second single which topped out at number 45 in New Zealand, number 41 in the UK, number 34 in Belgium, and number 13 in Australia. The song is about a young man so angry and so depressed. The lyrics are countered though with a rather peppy mid-tempo rhythm, creating an interesting contrast. It is almost as if the guy is so fed up that he has to laugh at the absurdity of it all.

“Move to Work” is next. This song about having to relocate for employment, even though it means having to leave someone he cares about, has a swinging tempo to it.

“On a Promise” is about committing to make a fresh start tomorrow; you can feel the sincerity and earnestness in Gift‘s assertions. I like the guitar rifts on this one; Cox and Steele are in fine form here.

Gift is backed up by Beverly, Gloria and Maxine Brown on “Like a Stranger”, an up-tempo track to close out the record. The song has some elements in common with 70’s disco which I enjoy.

I owned a copy of Fine Young Cannibals on cassette back in the 80's, which I picked up in 1988 when the follow-up album The Raw & the Cooked was popular. While they may have only put out two full length studio albums, a little bit of Fine Young Cannibals goes a long, long way. The combination of talent in this trio is like lightning in a bottle. I am very much a fan of the group and this album.
Posted by Martin Maenza at 4:30 AM