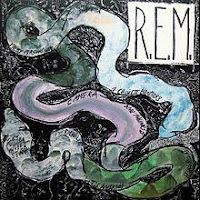 One year after the release of their debut album Murmur (click here for that review), the Georgia-based rock band R.E.M. was back in the studios in Charlotte, NC, to record their sophomore release. On April 9th of 1984, Reckoning hit the airwaves and record stores. The album reached number 27 on the US Billboard Hot 100, number 23 in New Zealand and number 91 in the UK.


Side one opens with “Harborcoat”, a song I hear at least once every couple weeks on Sirius XM 1st Wave. It has an enjoyable, bouncy tempo to it though, as par with me and R.E.M., I don’t have a clue what the song is actually about.

“7 Chinese Bros.” is interesting as a lyrical construct; it consists of two choruses that alternate. Only during the third delivery of the second chorus is one of the lines changed. The subject matter appears to be about communism in China. I really like the musical composition on this one - very upbeat.

“So. Central Rain (I’m Sorry)” was the first single from the album; it reached number 85 on the US Billboard Hot 100. The lyrics tell of two people living a couple time zones apart, their relationship ending abruptly. One party feels the need to apologize for how it all turned out.

I like the tempo on “Pretty Persuasion”, very peppy and energetic. The lyrics seem, to me, to be focusing on advertising that convinces one to purchase things they don’t need or that are just wrong for them. The seller is attractive and persuasive though and you forget about everything and just buy the product.

“Time After Time (AnnElise)” opens with an exotic sounding rhythm that sets the tone for the track. The repetition of the phrase “time after time”, delivered in Stipe’s somber tone, gives it an almost hypnotic mantra. I like how it fades out without delivering the final “time”.

Side two starts with “Second Guessing”, an up-tempo number. The lyrics are simple with a verse repeated twice, followed by an instrumental bridge and then the verse once more with the final line changed. What’s the song about? When it comes to R.E.M., I’d be second guessing myself if I knew.

“Letter Never Sent” seems to be, to me, about unresolved issues from a relationship that has ended. Things have been left unsaid, as in a letter that has been left unsent. Again, I enjoy the two part guitar/percussion music of the band.

The lyrics of “Camera” reflect upon the death of a friend of the band’s who died in an automobile accident. The verses are delivered in a somber tone, musically and lyrically. The tempo picks up only ever slightly on the chorus. The symbolism of the camera as a vehicle for memories is a good one.

“(Don’t Go Back To) Rockville” was the second single but it failed to make much noise on the charts. The lyrics were Mike Mills’ plea to his then girlfriend not to go back home to her parents’ home in Rockville, Maryland. Musically, the sound on this one has a county-rock flavor. It is definitely my favorite track from this album.

“Little America” closes out the album with a rapid rhythm number that ponders the future. It is full of interesting images like green shellbacks and tar-black sap.

I was in the later half of my freshman year of college when Reckoning was released. R.E.M. still had a strong following among the college radio station crowds at the time, so I am sure I heard many of these tracks on WITR, the station at RIT which I listened to quite often while in school, and on WCVF, the station at SUNY Fredonia when I was home on semester breaks and during the summer. I have part of this album already in my music library today and most likely will fill in the rest of the tracks over time just for completeness sake.
Posted by Martin Maenza at 4:30 AM