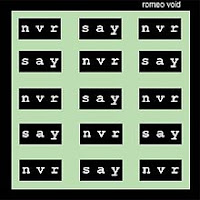 Hailing from San Francisco, California, the American rock band Romeo Void combined post-punk and new wave styles to create their sound. Following their debut album It’s a Condition in 1981, the group (consisting of Peter Woods, Benjamin Bossi, Frank Zincavage, Larry Carter and Debora Iyall) followed it up in January of 1982 with a four song EP entitled Never Say Never. Ric Ocasek of the Cars was one of the producers on the record.


The first side opens with a six minute version of the title track. "Never Say Never" has a pounding bass line by Zincavage and searing guitars by Woods. Carter keeps the beat going strong while Iyall delivers the vocals with plenty of attitude and just the right touch of sarcasm. And, of course, I just adore Bossi’s saxophone solo. This song was a huge favorite on the local college radio station I was listening to in 1982 during my junior and senior years of high school; MTV played the video for it a lot too. To this day, I still love the vibe this one gives off. It is a wonderful early 80’s alternative dance song.

Next up is “In the Dark” which opens with another Bossi sax solo. It sets the mood perfectly for this smoldering track about clandestine encounters in the night that don’t always turn out well.

Side two begins with “Present Tense”, a quick-step rocker that showcases the guitar work of the band. Once more, the lyrics deal with the struggles of relationships, this one emphasizing the tension.

“Not Safe” spotlights Carter on the drums at the start. And, again, Bossi’s sax plays a big part in the number (that is one of the reason I really like this band a lot). Together they create a hypnotic sound. The lyrics paint the image of a failed relationship between someone who holds down a steady job and another who is a student and barely has enough money for lunch.

This EP was a nice sampler to the sounds of Romeo Void. Never Say Never was a good way to broaden the audience for the group between their first and second full-length albums, with “Never Say Never” being the hook to pull the listeners in.
Posted by Martin Maenza at 4:30 AM