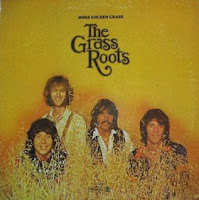 The Grass Roots were an American rock band from Los Angeles, California, that started out in 1966 and charted songs for about a decade. P.F. Sloan and Steve Barri of Dunhill Records wrote their hit songs; the duo initially used studio musicians to record the songs but later filled a line-up for touring, promotion and additional recording.


As the new decade was starting, the Grass Roots released their second compilation album that was a mix of tracks from two albums the previous year (Lovin’ Things and Leavin’ It All Behind) as well as some new songs. The line-up of the band at this point consisted of Rick Coonce, Warren Entner, Rob Grill, Terry Furlong, Brian Naughton and Dennis Provisor.

Side one starts with “Come On and Say It”, the third single for the band in 1970; it went to number 61 on the US Billboard Hot 100. The mid-tempo track, with its steady beat, is a plea by the singer to a woman to make up her mind about their relationship.

“I Can Turn Off the Rain” is a gentle ballad about finding a place of solitude and happiness.

“Heaven Knows”, from Leavin’ It All Behind, went to number 24 on the Billboard Top 40 in early 1970. The song celebrates the joys of being in love and wanting to proclaim it out all who will listen.

“The River Is Wide”, from Lovin’ Things, went to number 31 as a single on the US Billboard Top 40. I like the thunder effect at the start, which precedes the rain in the lyrics; the rising water from the storms is a symbol of the couple’s growing love, a force of nature that cannot be held back.

“Let It Go” mixes soul and blues together in a slow, simmering song.

Also from Leavin‘ It All Behind comes “Wait a Million Years”. As a single, the song went to number 15 on the Billboard Top 40 in the summer of 1969. This one has a definite 60’s sound, with the keyboards and the guitar riffs.

Side two opens with “Temptation Eyes” was the final single from the album, reaching number 15 on the US Billboard Top 40 in 1971. This is my favorite song from this collection; I like the harmonies on it and the sweeping movements of the music.

“Walking Through the Country” also first appeared on Leavin’ It All Behind, however it was released as the second single from this album in 1970. It reached number 44 on the US Billboard Hot 100. The opening movement makes it appear that the song will be big and sweeping, but the first verse slides into a slow, casual groove.

“Lovin’ Things”, of course, first came out on the 1969 album of the same name; as a single it went to number 49 on the US Billboard Hot 100. The song has a simple, pop pacing and sentiment.

The next track, “Get It Together”, was the B-side of the single “Baby Hold On”.

“Keepin’ Me Down” was the B-side of the single “Temptation Eyes”.

The Grass Roots is one of those groups from the late 60’s and early 70’s that you often heard on the radio yet they were not as big as many of the acts of the day. In that respect, that puts them in a category of unsung heroes of music. Listening to these songs takes me back to some of my earliest memories as a kid growing up. Back then, a kid of age five or so could hear these songs on the radio without his parents having to fear what he was being exposed to. It was definitely a simpler time with straightforward, well-constructed, melodic music.
Posted by Martin Maenza at 4:31 AM