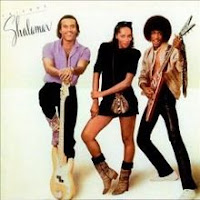 The next few days bring a number of celebrations for American singer, songwriter, and producer Jody Watley. Watley was part of the trio that made up the classic line-up of Shalamar (along with Jeffrey Daniel and Howard Hewett). On Monday January 30th she celebrates her fifty-third birthday.

And Sunday January 29th is the 30th anniversary of Shalamar's release of their sixth studio album Friends. This certified Platinum album went to number 6 in the UK charts, number 35 on the US Billboard Album chart, and number 1 on the US R&B charts. The album featured the musical talents of a number of family members of the R&B group the Sylvers (Leon, Foster, Ricky and Patricia) as well as James Ingram.


Side one opens with "A Night to Remember". As the first single from the album, it went to number 5 in the UK, number 44 on the US Billboard Hot 100, number 15 on the US Dance and number 8 on the US R&B singles charts. This preparation for an amazing date-to-be has a funky dance groove that is totally irresistible.

The beats continue with "Don't Try to Change Me", a dance track about accepting someone for the way they are and for how they do things.

Things slow to a mid-tempo with "Help Me". This smooth seductive number has a rich backing orchestration in the tradition of classic R&B/disco of the late 70’s.

"On Top of the World" brings together grooving guitars with sweet synthesized keyboards for a melodic mix. This anthem of positive thinking is very tightly produced.

"I Don't Wanna Be the Last to Know" brings things back down with a ballad featuring Watley on lead vocals.

Side two kicks off with the title track "Friends", the fourth and final single from the album; it charted in the UK and reached number 12. It has a light, bouncy beat to it that would have been right at home in any disco. I’m surprised this one didn’t do better on any of the US charts.

There‘s no time to take a break. "Playing to Win" is another strong dance song. This whole album makes for a great party soundtrack or motivation for an aerobic workout.

"I Just Stopped By Because I Had To" is another smooth ballad about the irresistible urge to be with that special someone.

"There It Is", the third single, charted in the UK and reached number 5. The rhythms on this one are very reminiscent of Nile Rodgers and Chic, which is always a great thing.

The album closes with the track that was released as the second single. "I Can Make You Feel Good" fell short of the top 100 on the US main charts (stalled at 102) but did reach number 33 on the US R&B charts and number 7 on the UK charts. I actually remember this song from back in the day; either I heard it on the radio at the time it came out or possibly out at dance clubs I frequented in college a few years later.

While I was very familiar with Shalamar from their Top 40 hits from the early 80’s, I have to admit that Friends slipped past my radar back when I was in high school in 1982. And that’s a shame as the songs on this album are all right at home with the R&B dance hits I was into during my clubbing days in college. The good thing about music is there are always gems from the past to be uncovered if you’re willing to look for them. This album falls into that category for me. I’ve got some iTunes money leftover from Christmas that just might have to go to picking up this record.
Posted by Martin Maenza at 4:04 AM