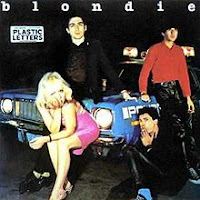 Between Blondie’s self-titled debut album in 1977 and their third album Parallel Lines in the fall of 1978 (click here and here for each of those two reviews respectively) came their February 1978 sophomore release Plastic Letters. This album went to number 72 on the US Billboard Hot 200, number 9 in Germany and number 10 in the UK (the later country it had reached Platinum status).


Side one kicks off with “Fan Mail”, a new wave number with strong synthesizer part performed by the song’s writer James Destri. Debbie Harry growls out the vocals near the end.

Next up is “Denis”, a cover of the 1963 song by Randy and the Rainbows. This single was a big hit in Europe (it reached number 2 on the UK charts) and in Australia (where it went to number 19). Harry improvised one of the verses in French with a few grammatical errors. This is my favorite track from the record.

Stein penned “Bermuda Triangle Blues (Flight 45)” which opens with a rich guitar solo. Harry’s vocals are haunting on this tale of a fateful flight over the Atlantic. Destri’s organ equally adds to the mood.

Stein also wrote the next track “Youth Nabbed as Sniper”. The song, with a bit of a 60’s surf sound, is driven by Clement Burke’s thundering drums.

“Contact in Red Square” is an energetic tale of cold-war espionage. Destri wrote himself a fun keyboard part on this one, including a bit of a Cossack dance theme added in.

The other single from the album was “(I’m Always Touched by Your) Presence, Dear”; it went to number 10 on the UK charts. The song was written by former bass player Gary Valentine, who left the band just before the album was recorded, for his then girlfriend Lisa Jane Persky. I like the melody on this one.

The side closes with “I’m on E”, a rapid-fire new-wave dance track Stein co-penned with Harry.

Side two opens with “I Didn’t Have the Nerve to Say No”. The song has an erratic rhythm, changing tempos numerous times in less than three minutes. However, it works well to make an interesting song you really have to focus your attention on.

“Love at the Pier” has a classic rock groove to it, very up-tempo and fun, yet also includes some great backing sound effects by the guys. It paints the picture of a wild, romantic night at the Jersey boardwalk.

Destri‘s keyboards on “No Imagination” have a classic twist to them with the rest of the guys providing a full wall of sound. Harry’s vocals carry an air of sophistication.

Another musical genre shows up with “Kidnapper”. This Destri penned track has a blues-swing to it. Dale Powers contributes backing vocals on the song.

The band kicks it back into overdrive with “Detroit 442”, an ode to the American automotive capital.

The side and the album close out with “Cautious Lip”, the longest track on the record. It has a tribal beat and a sci-fi synthesizer line that makes for a curious mix. I love how the tempo gets into an urgent pace about three minutes in, working everyone into a frenzy.

At the time Plastic Letters came out, I was still in junior high school and thus my disco/pop phase. As such, most of this album passed beyond my musical radar. Later that year I would get into Blondie thanks to Parallel Lines but it take a couple decades to pass before I would actually seek out the rest of the record. Along with their first album, this one helps fill in the back story of one of the founders of the American new-wave movement.
Posted by Martin Maenza at 4:30 AM