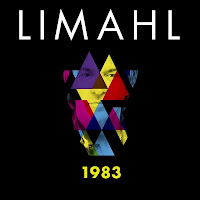 This week saw the single and EP release of 1983 by Kajagoogoo lead singer Limahl. Working with Tommy Olsen and writer/producer team Rune Maurtvedt and Stig Erik Antonsen, he has crafted a highly danceable track that has both a modern sound and a touch of nostalgia too. It can easily appeal to a new audience of youth today and those forty-something folks like myself who are parents of said teens and young adults. It is a song that can bring generations together.

In February of that year, I turned eighteen years old. That meant I was an adult, could legally drink (back then New York State hadn’t yet bumped up the drinking age to twenty-one and, when they did, most of us were grandfathered any way), etc. So it was about a little more freedom and responsibility too.

In June of that year, I graduated high school. It was a time of endings and saying goodbye, until I occasionally was back home for visits, to old friends I had known for many years (some as far back as Kindergarten when I was four years old).

In September of that year, I went off to college in Rochester NY to begin studying computer science. It was also a time of new beginnings, to meet new people and broaden my experiences along side all those people on campus. It was the start of a fantastic four and a half year chapter of my life.

In my iTunes library today, the year 1983 is represented by over seven hundred and ninety tracks. It has only a slight lead on the predecessor year as 1982 has about ten tracks less. So, I definitely love the music from this time period.

Clearly 1983 was a key year for Limahl too. It was the year that Kajagoogoo released “Too Shy”, the song that made the band known around the world; Limahl co-wrote that track. The band’s video for that song aired in heavy rotation on MTV, very popular with teens like me due to its catchy synth hooks and rhythm.

The opening will call everyone to the floor like a siren-song and the drumbeats will keep them there. And forget about having a hot-tub time machine; this song can take you back with the help of a lighted dance floor and spinning strobe lights.

Lyrically, Limahl brings back all the images of the days of new-wave: androgynous identities and the new romantic styles, the hey-day of MTV when videos were played all day and night by Alan, JJ, Mark, Nina, and Martha. I love the shout-outs to bands like Soft Cell, Duran Duran, Human League and Visage (all groups whom I enjoy).

If you’re a fan of classic new wave and early alternative music from the 80’s and you also love a song with a kicking dance beat, you definitely want to get your hands on “1983”. The single and EP are available everywhere for download (iTunes, Amazon.com, emusic.com and more).
Posted by Martin Maenza at 4:31 AM

i love it! thanks so much Martin this was a great blog. I will tweet this as soon as I get out twitter jail. thanks again, :)