Irene Cara - Anyone Can See 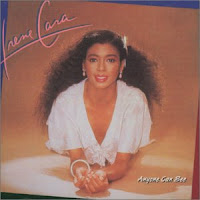 Irene Cara began her career at a very young age. During the 1970’s she was a regular on the PBS education series The Electric Company. She also appeared in a number of on-and-off Broadway shows and musicals. In 1980, she hit the big screen in the movie Fame for which she performed a number of songs including two that were nominated for Academy Awards (click here for my review of that motion picture‘s soundtrack).

In January of 1982, Cara released her first full length album entitled Anyone Can See. The record had a strong showing on the R&B charts and a number of singles.


Side one begins with a cover of the Four Tops’ number 1 smash hit from 1966 “Reach Out (I’ll Be There)”. Cara’s version has a disco dance beat to it with a prominent piano line.

“My Baby (He’s Something Else)” is next with its bouncy pop rhythm thanks to Gordon Grody’s synthesizer arrangement. Grody co-wrote the song with Cara and Carlotta McKee. The video for this song has a variety show vibe to it with four orange suited dancers supporting Cara in the number.

“Anyone Can See” is a beautiful and powerful piano ballad which peaked at number 42 on the US Billboard Hot 100 chart. Cara co-wrote this one with Bruce Roberts; her voice has that sweet and emotional delivery to convey the sentiment of the lyrics.

Cara also co-wrote “Don’t Throw Your Love Away”, this time with Gail Boggs. The track has a bit of an old fashioned doo-wop beat, slow and soulful.

“Slow Down” closes the side with a track penned by Cara alone. Again, we have another wonderful R&B song with a strong piano accompaniment. This allows her strong vocals to take center stage and shine through.

Side two opens with “Whad’ya Want”, another mid-tempo song with a bubbly beat. This one is a little weaker than the side one offerings. I don’t feel Cara’s tough attitude on this one; she just doesn’t sell the angry woman on the lyrics.

Things pick up a bit with “You Hurt Me Once”, a little more up-tempo and more believable. I can feel Cara’s aching and vulnerability here.

The dance beats continue with “Thunder In My Heart”. I like the horn sections on the opening; it gives the song a big disco sound. Leo Sayer and Tom Snow wrote the song originally, and it is the title track of Sayer’s 1977 album.

“Why” is the first song to feature a more rocking sound thanks to the heavy guitar. Cara pulls this one off well, showing her versatility. It has a bit of a Pat Benatar feel to it.

“True Love” closes out the album with another danceable track. This one has a strong beat and supportive guitars.

I became a fan of Irene Cara’s singing from my very first viewing of Fame. This debut album is a pleasant listening experience with a number of decent tracks. The disco and R&B sounds work well for me, even though in 1982 the main charts were changing thanks to the coming of new wave, alternative music and the advent of MTV. It is a shame this record did not get as much airplay and notice as it should have. Cara certainly had the chops to deliver the goods.

You can find the tracks from this album to listen to on YouTube, and the album is available for download on iTunes as well. There are definitely a few tracks from this one that I want to add to my music library in the future. Copies of the album on CD are a little harder to come by (you’ll have to pay a high price for an import of this one).
Posted by Martin Maenza at 4:30 AM

Email ThisBlogThis!Share to TwitterShare to FacebookShare to Pinterest
Labels: 80's, Anyone Can See, Irene Cara, music

I always liked Irene Cara she had a raw talent like no other. She was quite the actress as well, having great roles in Roots and Guyana Tragedy.

Me too. Very talented indeed.