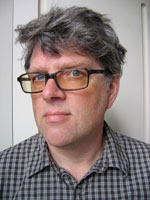 Born in Halifax, West Yorkshire, England, started out as a music teacher. In 1977, he formed the Thompson Twins which eventually settled in as a trio with Bailey (on vocals, guitar, bass and keyboards), his then girlfriend Alannah Currie (on percussion, saxophone and vocals) and Joe Leeway (percussion and vocals). Bailey and Currie eventually married.


After the Thompson Twins broke up in 1991, Baiely and Currie formed the techno-oriented duo Babble. Bailey has also produced a New Zealand band by the name of Stellar*, and he won a Record Producer of the Year award for their debut album. He was also involved in a dub project called International Observer.

For my review of the Thompson Twin's 1983 album Side Kicks, click here.

For my review of their 1984 album Into the Gap, click here.

For my review of their 1985 album Here's to Future Days, click here.
Posted by Martin Maenza at 4:30 AM

I grew up with the Thompson Twins and their amazing music. "Lay your hands on me" is still my favourite song and is played nearly all the while driving with my car. There are so many wonderful memories - thank your very much for being a part in my youth!