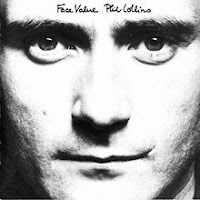 After over a decade as the drummer for the rock band Genesis, Collins decided to do his first solo album. The result, 1981's Face Value, was very well-received worldwide. The record went to number 1 in the UK, Canada and Sweden, number 2 in Australia and Germany and number 5 in Norway. In the US it peaked at number 7 on the Billboard Album chart. Since its release it has gone Platinum in sales multiple times over.


Side one opens with "In the Air Tonight" which was the first single and a smash hit; it reached number 19 on the US Billboard Hot 100, number 2 in the UK and Ireland, and number 1 in Germany, the Netherlands, Sweden and Switzerland. The song opens with an amazing mood-setting instrumental; Collins' drums and keyboards are haunting on this track and sound amazing with headphones on (the sound bouncing from one channel to another, especially on that drum roll at the three minute forty second mark). This is one of those songs I enjoy listening to with my headphones on in a darkened room, letting the music just wrap around me. It has gone on to appear is so many TV shows, films and more; the one most people associate with the song is the pilot episode of quintessential 80's cop show Miami Vice in 1984.

"This Must Be Love" opens with a jazz vibe thanks to Alphonso Johnson on bass. Seventies singer Steven Bishop gives an assist on the backing vocals. I really like the gentle percussion on this one.

"Behind the Lines" first appeared on the Genesis album Duke from 1980. Collins' new version is much lighter with a bit of funk too. The songs tell of a pleading between two former lovers. This version of the song has a Motown vibe to it thanks to the bass and the backing vocals (it actually makes me think of the Jackson 5 in spots).

I like how the crickets at the end of the last track segue right into "The Roof is Leaking", a song about making it through a hard winter. I really like the piano on this one; Collins gives it a bit of a rag-time/country feel in spots with a little help from Daryl Stuermer on the banjo and Joe Partridge on the slide guitar.

An instrumental piece "Droned" is next. It has a rich, textured feel that builds with layers and tempo as the track progresses. It has a natural, almost spiritual element to it. Very interesting.

The instrumental "Hand in Hand" carries over some of those natural elements at the start. The cherubic backing sounds on this one are provided by children from choirs in Los Angeles.

Side two starts with "I Missed Again", the second single. It went to number 19 on the US Billboard Hot 100, number 14 in the UK and number 12 in Ireland. Lyrically, the song touches upon the anger and frustration that Collins was experiencing due to his first wife Andrea leaving him. Musically, the up-beat accompaniment features a powerful horn section made up of trombone, trumpets and saxophone that gives the song a 60‘s R&B classic sound. Ronnie Scott performs the sax solo here.

"You Know What I Mean" is a gentle piano ballad with string orchestra support, a format that Collins would continue to master as the 80’s progressed. His vocals really express the sadness of a broken heart, another aspect of his failed marriage.

"Thunder and Lightning" tries to lighten things up again with a mid-tempo groove about falling in love again. John Giblin plays the bass on this one.

"I'm Not Moving", the shortest track on the record, almost has some disco touches to it along with a few synthesized hooks too. The falsetto and Vocoder remind me a bit of the Electric Light Orchestra.

The third and final single from the album is the beautiful ballad "If Leaving Me Is Easy". The track reached number 17 on the UK charts and number 25 in Ireland; the single was not released in the US. This one has a few interesting things to note. The first is that Eric Clapton plays guitar on it, and the second is Collins sings in a high falsetto on the chorus. I really like the saxophone opening and closing by Don Myrick; it really fits the mood of the song.

The album closes with a cover of "Tomorrow Never Knows", a Lennon-McCartney composition that appeared on the Beatles' 1966 album Revolver. Collins does a great job recreating the psychedelic sounds on this one, capturing yet another aspect of music from the 60’s. At the very end, Collins sings a soft verse of “Somewhere Over the Rainbow”. It is definitely a different sort of way to close out the record.

When Face Value was released in 1981, surprisingly it was not on the musical pallet I had been going through then. The album was more of a pop-rock vibe when I was very much into the synth-driven bands. However, this is a solid album from start to finish. Collins does a fantastic job with varying styles, and he brings together a great group of musicians to give life to each track. This is definitely one of those albums on my list to finish off adding to my music library.4
Posted by Martin Maenza at 4:30 AM