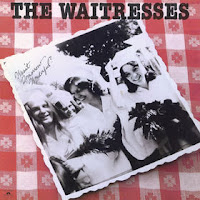 Hailing from Akron, Ohio, the Waitresses was a new-wave rock band that performed from 1978 to 1984. Initially the group was Patty Donahue on lead vocals, Tracy Wormworth on bass and Ariel Warner on backing vocals. Chris Butler on guitar, Billy Ficca (formerly of Television) on drums, Dan Klayman on keyboards, and Mars Williams on saxophone and reed instruments rounded out the group.

The band put out their first single “Slide” in 1978 and then “I Know What Boys Like” in 1980. In 1981, their song “Christmas Wrapping” appeared on the album A Christmas Record, a compilation of seasonal songs by various artists on the ZE Records label.


The Waitresses were then signed to Polydor Records and on January 11th, 1982 (exactly thirty years ago today), they released their first studio album Wasn’t Tomorrow Wonderful. The record went to number 41 on the US Billboard Album charts.

Side one begins with “No Guilt”, a bouncy little number with a stream-of-conscious set of lyrics dealing with life post-breakup. How often do you hear a song that mentions Walter Conkrite and John Belushi as well as three-pronged outlets?

“Wise Up”, the first track featuring Williams’ sax, is a musical version of group therapy. Donahue acts as the clinical moderator, and Butler delivers a searing guitar solo.

Klayman‘s keyboards set the pace for “Quit”, a song about fighting against those feelings to throw one’s hands in the air and just give up when things get complicated.

“It’s My Car” is about one of those road-trips with friends that turns chaotic. I love how the backseat drivers pop up in the single audio channels of one speaker, giving a cool distant feel to the backing vocals.

“Wasn’t Tomorrow Wonderful?” is another up-beat track with a perky piano and driving drums. The lyrics are a positive affirmation mantra, reminding us to pick our chin up and stand tall rather than let life get us down.

Side two opens with “I Know What Boys Like” which was re-released as a single in 1982 and reached number 63 on the Billboard Hot 100. Donahue’s flirty tease goes perfectly with the catchy guitar hooks on this one. This is definitely one of those less played new-wave tracks from the early 80’s, often relegated to the land of lost hits. Luckily folks from my generation, like director Ryan Murphy, enjoy it; the song appeared on a season 2 episode of Glee.

The hard-rocking “Heat Night” opens with another searing sax solo. The tempo builds to a fevered pitch and then a final guitar strum.

“Redland” is a sarcastic commentary on the spread of communism.

“Pussy Strut” takes a geometric and scientific analysis to the way women walk to best attract the attention of possible suitors. I love how the band plays with these lines to deliver smart sexual innuendo.

“Go On” is all about relationships that never work out despite all the warning signs. Clearly, the singer has had a rough time of it in the dating world.

“Jimmy Tomorrow” opens with some sci-fi sounding tones and chords that then evolve into an up-tempo rocker. The lyrical structure is non-typical, sticking to a general non-repeating narrative and only introducing a kind of chorus nearly three quarters of the way through the song.

The CD release of the album included two versions of “Christmas Wrapping” (the original, longer version and a short single release) and the single’s B-side “Hangover 1/1/83”, an instrumental number.

I mentioned previously how I had the Waitresses’ 1982 follow up EP (click here for the review of I Could Rule the World If I Only Had the Parts) and loved it. A friend of my brother owned a copy of Wasn’t Tomorrow Wonderful on vinyl and let me record a copy on cassette in the early 80‘s. I savored that tape quite a lot during my high school and college years. This was new-wave very much targeted at the smart and geeky subculture of which I was a card carrying member.

A number of years back, I was able to combine the tracks from their greatest hits CD with downloads in order to have a complete digital copy of the album again. Thirty years later, I still enjoy this record a lot.
Posted by Martin Maenza at 4:30 AM