Neil Diamond - On The Way To The Sky 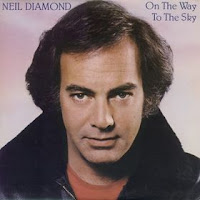 Continuing off the successful momentum of 1980’s The Jazz Singer soundtrack (click here for my review of that album), Neil Diamond followed it with his fourteenth album On The Way To The Sky in November of 1981. The album reached number 17 on the US Billboard Hot 200, number 39 on the UK album charts, number 12 on the Australian charts, and number 11 on the New Zealand charts.


Side one begins with “Yesterday’s Songs”, the first single from the album. Released a few weeks before the album, it climbed all the way up to number 11 on the US Billboard Top 40 and achieved the number 1 spot on the US Adult Contemporary charts. This mid-tempo tune is one of those I heard so often on the Top 40 radio back in the early 80’s, so much so that I could sing along to it. I like the sentiment of the lyrics, a reminder of the music of the past and how they still have their place in our hearts.

The title track “On the Way to the Sky” served as the second single; it was released in February of 1982 and peaked at number 27 on the Billboard Top 40 and number 4 on the US Adult Contemporary charts. It has a subdued, subtle accompaniment so that the touching lyrics take center stage.

“Right By You”, the B-side to the third single, has almost a country twang to it thanks to the guitar riffs. It has a sensual side too with its pillow-talk lyrics.

“Only You” features a suave, sassy dance rhythm to it with a backing of strings and horns. The song reminds me of lighter, late 70’s disco.

“Save Me”, the B-side to the second single, is a lushly orchestrated plea for help from falling hopelessly in love. I like the gentle bongo drums of this one and how the verses build to the powerful chorus.

“Be Mine Tonight” was the third single from the album. It was released in May of 1982, peaking at number 35 on the Billboard Top 40 and reaching number 2 on the US Adult Contemporary charts. The up-beat guitar on this one reminds me of Diamond’s earlier work in the 60’s that helped establish him as a songwriter and an artist. It is definitely my favorite of the three singles from this album.

Side two opens with the gentle ballad of “The Drifter”, a man who wanders the countryside alone. I think the song is very beautiful.

“Fear of the Marketplace” opens with a moody piano that is soon replaced with an ominous rocking beat. The lyrics tell of conquering that fear, turning the music into a more uplifting sound.

“Rainy Day Song”, the fourth and final single from the album, failed to make any chart noise. The stings and the keyboards on this one simulate the pitter-pattering of those cloudy days, while the lyrics tell of a heartbroken man whose days are now full of sadness.

“Guitar Heaven” was the B-side of the first single. The rhythm on this one jangles along at a quick-step pace on the verses. It celebrates the power of music.

The album closes with the ballad “Love Burns”. Diamond’s powerful voice shines in this song about the heat and fire of one of the most powerful emotions known.

I was in my sophomore year of high school when On The Way To The Sky was released. Listening to Neil Diamond was not considered cool among a majority of folks but that was okay by me. I never was part of that cool crowd any way. What I’ve always enjoyed about Diamond’s music is he created such a rich musical tapestry over the years. This album is a part of that rich history.
Posted by Martin Maenza at 4:30 AM

Email ThisBlogThis!Share to TwitterShare to FacebookShare to Pinterest
Labels: 80's, music, Neil Diamond, On The Way To The Sky, Yesterday's Songs

Martin, I'm with you--I've been a big fan of Neil Diamond since the first time I heard "Cherry, Cherry". Never even HEARD of this album, I'm going to check it out on Amazon's MP3 site tonight--thanks!

Enjoy the performance of your beloved star with your friends and family. Buy Neil diamond concerts tickets of all events that you love to attend and make your possible presence by booking your desired seat.