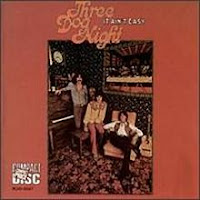 As the new decade was starting, Three Dog Night was finishing up their third studio album. The original working title was The Wizards of Orange and had planned to have a cover with the band wearing orange make-up and body stockings to appear as if they were posing nude. The record label rejected the title and cover art.

On March 31, 1970, they released It Ain’t Easy on vinyl and 8-track tape. The album did quite well, reaching number 8 on the US Billboard Hot 200 and number 5 on the Canadian album charts.


Side one opens with Mike Allsup and Joe Schermie‘s grinding guitars on “Woman”, a hard-rocking serenade to that special lady. The song takes it down to the bear minimum for the bridge before exploding again for the final minute and a half.

The next track “Cowboy” was written by Randy Newman. Where the first track was energetic and raucous, this one is very sedate and restrained. The music gives the impression of the wide-open plains of the American mid-west where there might not have been another person around for miles. The vocals convey a very lonely feel.

The next song was written by Ron Davies and appeared on his 1970 album. It was also recorded by both John Baldry and Mitch Ryder in 1971 and by both David Bowie and Dave Edmunds in 1972. The Three Dog Night version of “It Ain’t Easy” has a more country sound to it with its sauntering, laid-back guitar accompaniment and harmonica solo.

“Out in the Country” was the second single from the album. It went to number 15 on the US Billboard Top 40, number 11 on the US Adult Contemporary chart, and number 9 in Canada. The song has a pleasant soft rock sound similar to that of America, another early 70’s band. Often partnered collaborators Roger Nichols and Paul Williams penned this song.

“Good Feeling 1957” has a positive vibe thanks to its up-tempo rhythm. The song has an early 60’s soul sound to it with both the music and vocals. It brings to mind a sunny day at the beach, fun and carefree.

Side two starts with “Rock & Roll Widow”, an original composition credited to all seven members of the band. This jam tells of the hardships of being the wife to a member of a constantly working rock band.

Another Randy Newman track appears next as the album‘s first single. “Mama Told Me (Not To Come)” went to number 2 in Canada and number 3 in the UK; in the US it spent two weeks at the number 1 spot (bumping the Jackson 5’s “The Love You Say” and then being bumped by the Carpenters’ “(They Long to Be) Close to You”). Singer Cory Wells delivers the vocals in a very distinctive vocal style as he pretends to be a straight-laced guy who has encountered a wild party. This is one of those songs I’ve heard so many times over the decades that I quickly find myself singing along to it.

The next song is an Elton John/Bernie Taupin composition. Three Dog Night actually recorded and released “Your Song” the same month that Elton John did. Both versions have sweet and innocent touches to them, this version is actually a little more rocking musically. I enjoy this version almost as much as I like John’s.

I like the percussion and keyboard combination on “Good Time Living”; it is a very distinctive characteristic of the music of Three Dog Night. And don’t let that fade out fool you - there is still another thirty seconds left to go.

I like It Ain’t Easy; the album has a nice combination of hits from Three Dog Night as well as some very sold deep tracks.
Posted by Martin Maenza at 4:30 AM