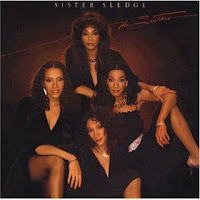 In January of 1982, the quartet of female siblings from Philadelphia, Pennsylvania, released their sixth studio album The Sisters. The record reached number 69 on the US Billboard Hot 200 chart and number 17 on the US Billboard R&B chart. It also generated a pair of singles.


Side one starts with “Super Bad Sisters”, a four and a half minute funky dance groove. It showcases the sweet vocal harmonies of the group and also includes some decent rapping by the gals as well as Kenneth and James Williams.

Next up is the first single from the album, a cover of the 1964 Mary Wells’ hit “My Guy”. Sister Sledge took their version to number 23 on the Billboard Top 40 (the last of their singles to reach the Top 40) and number 14 on the R&B charts. The track has a good mid-tempo beat to dance to.

“Lightfootin’” continues the dance part with a song about the unpredictability that comes from a night of dancing.

Things slow down with a swaying love song called “My Special Way”. Joni’s beautiful vocals are spotlighted on this track.

As expected, “Grandma” is a song in tribute to the family’s matriarch who taught the girls life lessons and provided them an example a strong woman. Their grandmother even makes an appearance on the track.

Side two begins with “Get You in Our Love”, a mid-tempo dance track. It features multi-layered percussion found in many late 70’s disco offerings.

“Il Maquillage Lady” is a dance tune about a woman who uses make-up to create a mask behind which she hides. The song features some sexy saxophone and, as the title suggests, a little bit of French.

Things slow down with “Everybody’s Friend”, a lilting, jazzy ballad. Eldest sister Debbie leads this song about someone who is the life of the party and loved by all, but is in fact a truly lonely soul. For a group known for dance songs, it was definitely a more mature and sophisticated track.

“All the Man I Need” was the second single from the album; it went to number 45 on the R&B charts. This slow and sensual ballad features a piano accompaniment and guest vocals by David Simmons. Whitney Houston later recorded a version of the song in 1990, under the title “All the Man That I Need“, that went to number 1.

The album closes out with another disco dance song. “Jackie’s Theme: There’s No Stopping Us” is full of positive affirmations and empowerment.

I was very much aware of Sister Sledge’s big dance hits from the late 70’s and enjoyed them. For someone who loves disco music, their sweet, soulful sound fit right in. If I had come across this album in 1982, I surely would have enjoyed it. Even today, as this album celebrates its 30th anniversary in 2011 I still find The Sisters to be a pleasant listening experience.

Updated 1/9/12: thanks to an anonymous "Sledgefan", I've updated a few things above. Comments always appreciated.
Posted by Martin Maenza at 4:30 AM

Thanks for sharing. I love Sister Sledge. I must comment on a couple things though. You mentioned that Kathy sang lead on "My Special Way", when it was actually Joni who lead that song. You also failed to mention anything about "Everybodys Friend" other than listing it, so I'll do it for you...Things slow down with the languid and jazzy ballad "Everybodys Friend", lead by eldest sister Debbie. The song speaks about someone who is the "Life of the party" and loved by all, but is truly a lonely soul. A mature and sophisticated song for a group known for lighting up dance floors.

Thank you, Sledgefan, for helping me fill in the details above. I've updated the post based on the information you provided. Thank you for reading as well. I hope you come back to visit the blog often.