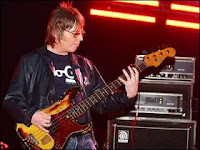 Born in Manchester, England, Rourke received his first guitar at age 7. At age 11, he made friends with a young John Maher (who would later use the studio name Johnny Marr). At age 15, Rourke dropped out of school to work and play in music; one of the first bands he belonged to was a funk group called Freak Party.


In 1982, Marr and Morrissey decided to put together a band. Marr brought in Rourke and the Smiths were born. The group was together until 1987; Rourke was with the band for most of that time except for a brief period where he was sacked from the group.

After the Smiths, Rourke has recorded with artists like the Pretenders, Killing Joke, and FreeBass.

For my review of the 1985 album Meat Is Murder, click here.

For my review of the 1986 album The Queen Is Dead, click here.

For my review of the 1987 album Strangeways, Here We Come, click here.
Posted by Martin Maenza at 4:25 AM

Email ThisBlogThis!Share to TwitterShare to FacebookShare to Pinterest
Labels: 80's, Andy Rourke, Meat Is Murder, music, Strangeways Here We Come, The Queen Is Dead, the Smiths