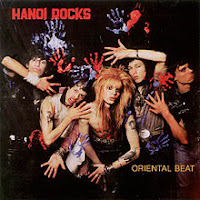 In late 1979, the Finnish rock band Hanoi Rocks was formed by Michael Monroe and Andy McCoy. They did some early recordings at the end of 1980 with their first album released in 1981.

In January of 1982, Hanoi Rocks released their second studio album Oriental Beat which they recorded in London. The album helped to expand their audience in markets like the UK and Japan. Early music videos on MTV also helped expose them to a new audience in the United States.


Most of the tracks on the record were written by McCoy, with the assist by Monroe on a pair of them. The album was produced by Pete Wooliscroft who has worked previously with Frank Zappa, among others.

Side one opens with “Motorvatin’”, a tune co-written by McCoy and Monroe. Gyp Casino starts with a driving beat followed by the guitars by McCoy and Nasty Suicide. Casino was fired from the band shortly after the album release and tour due to increased heroin addiction and being personally critical of his own playing. The song has a lot of energy with lyrics about finding a focus and purpose in life.

On “Don’t Follow Me”, vocalist Monroe tells the tale of a young woman who grew up to be an outlaw and living life on the edge. She advises that she is not one to be followed as she is lost too. The song has a sweet sax solo by Monroe as well.

Sam Yaffa lays down a solid bass line on “Visitor”, mirroring the near hypnotic chorus that repeats the song title over and over again.

The other McCoy/Monroe collaboration is “Teenangels Outsiders”. The song uses the classic rock theme of teenaged rebellion and has a bit of 70’s sound to it to boot.

“Sweet Home Suburbia” has a wonderful, tribal rhythm to it thanks to Casino’s drums. The guitars fill the song with funky rock riffs too. The lyrics tell of life in the hard, cold city where sex and drugs are a way of life.

Side two starts with “M.C. Baby”, a pedal-to-the-metal ode to a sixteen year old biker babe who knows how to handle her motorcycle and rock her leathers.

“No Law or Order” is a rebellious rock song about breaking the law. The song sounds a bit like a tribute to the Clash in its musical style and subject matter.

The title track “Oriental Beat” is about taking a getaway trip to Hanoi, Vietnam, to unwind and party. I like the rapid-fire rhythm of this one; it helps the song to rank as my favorite from this album.

Opening with Monroe on harmonica, “Devil Woman” has a rocking-blues vibe to it. The lyrics are all about a woman who is just no good for the singer. The guitar riffs are reminiscent of the theme from “Peter Gunn”.

Next up is a cover a tune written by American country musician Hoyt Axton who has a prominent career in the 1960‘s and 1970‘s. Hanoi Rocks version of “Lightnin’ Bar Blues” has a solid rock sound to it.

“Fallen Star” is a bit of a different ending note. A single piano accompaniment is used on this one and the lyrics consist of only nine lines, telling the sad story of a fallen star.

While Oriental Beat is ranked as a Hanoi-classic by fans, a number of the band members have gone on record with negative comments about it. While Monroe thought the album was good, he blames Wooliscroft for ruining the sound with bad production and mixing. Yaffa actually called the album “a piece of shit” in a 1985 interview.

While I was only marginally aware of the band in the 80’s, I really got into Hanoi Rocks back in 2009. I found the band’s albums on emusic.com and spent a few credits on each to give them a shot. And I am glad I did as Oriental Beat is a rocking good-time.
Posted by Martin Maenza at 12:41 AM