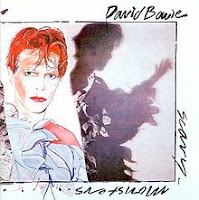 On September 12th of 1980, David Bowie released his fourteenth studio album Scary Monsters (and Super Creeps), his final album on the RCA label which he had been with since 1971. After trio of artistic releases, this album was developed with a more commercial approach which paid off quite well. The album went to number 1 in the UK, Australia and New Zealand, number 3 in Sweden, and number 4 in Switzerland. In the US, it reached number 12 on the Billboard Album chart.


Side one begins with “It’s No Game (No. 1)”, a hard-rocking song with lyrics spoken in Japanese by Michi Hirota and Bowie screaming the translations in English. The combination makes for a rather harsh, jarring composition.

The fourth single from the album “Up the Hill Backwards” reached number 32 on the UK charts in 1981. The song has been interpreted as a commentary on Bowie’s divorce from wife Angela. The drumbeats are in the form of a march, mirroring the lyrical message that life goes on as it always has despite huge changes (like a divorce).

“Scary Monsters (and Super Creeps)”, the third single, went to number 20 on the UK charts in 1981. Robert Fripp’s guitar sets an erratic mood that is reflective of the song’s tale of a woman descending into madness.

The first single from the album was “Ashes to Ashes”, which went to number 1 in the UK. The music is quirky with its plucking sounds from the synthesizers, make it a perfect song for the new wave movement that was building at the time of its release. The melancholy lyrics revisit the character of Major Tom from Bowie’s 1969 track “Space Oddity”; the former spaceman has fallen on hard times and heavy drugs.

The side closes with the second single “Fashion”; it went to number 5 in the UK and number 70 on the US Billboard Hot 100. The track is the most danceable one on the record, featuring a funky guitar groove and disco drum beat. The lyrics mix the worlds of politics with runway models, creating an almost sterile, unemotional viewpoint. This is certainly my favorite track from the album.

Side two starts with “Teenage Wildlife”, the longest track on the album. Clocking in at nearly seven minutes, the song is a statement on the music scene post-punk and in particular English singer Gary Numan. I like the more laid back melodies on this one.

“Scream Like a Baby” is the tale of Sam, a political prisoner. The music is stark and cold, like the walls that keep Sam confined.

The only track on the album not penned by Bowie was “Kingdom Come”, which was written by Tom Verlaine who was the front man for the band Television. The lyrics of this 1979 song too are about a man in prison, breaking rocks daily in the yard and praying for the judgment day to come to free him from the toil. I like Verlaine’s straight-forward approach to the subject.

Next up is “Because You’re Young” which features guest guitarist Pete Townshend.

While the album closes with a bookend to the opening track, “It’s No Game (No. 2)” is less intense and a bit more resolved to the world situation (even though the situation really has not changed).

When Scary Monsters (and Super Creeps) was released, I was just starting my sophomore year of high school. By 1980, Bowie had been in the music business for quite awhile and was known for his more artistic, thought-provoking work. This was a time when I was still listening to Top 40 radio and had not yet transitioned over to the alternative sounds of college radio. As such, most of this album passed outside of my scope of listening. Besides a handful of tracks, I really did not have too much of this album in my music library either. For me, it is a bit hit-and-miss as a majority of the record has a stance of doom, gloom and futility with little light of salvation and redemption.
Posted by Martin Maenza at 4:30 AM