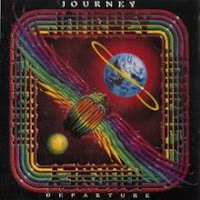 On March 23rd of 1980, the American rock band Journey released their sixth studio album, the final full studio album for the band to include founding member and keyboardist Gregg Rolie. Departure has gone multi-Platinum in sales and ranked number 8 on the US Billboard Hot 200, number 48 on the Canadian charts, and number 61 on the Japanese charts.


Side one opens with the hit single “Any Way You Want It”, which peaked at number 23 on the US Billboard Hot 100 and number 5 in Canada. The song features a give and take exchange between guitar and vocals, creating its catchy rhythm and hook. The song has gone on to infuse itself into the pop-culture tapestry over the years. It has been used in a number of commercials from Heinz ketchup to McDonald’s, Ford to Samsung; it also was featured in a scene in the 1980 film Caddyshack. I’ve always enjoyed this song; the up-beat sound really gets the blood pumping.

“Walks Like a Lady”, the second single, went to number 32 on the US Billboard Hot 100 and number 15 in Canada. I like Rolie’s opening keyboards on this one. Combined with Ross Valory‘s bass and Neal Schon‘s guitar, the track has a cool jazzy feel to it.

The tempo slows a bit with “Someday Soon”, a song full of hope and promise for better days to come. Rolie takes over the lead vocal duties from Perry on this one.

“People and Places” was the B-side to the second single. Schon assumes the lead vocal duties for this track while the rest of the guys provide the echoing vocals in the background. This one dips back into the group’s progressive-rock sound of the mid-70’s.

With Rolie on harmonica and Schon‘s repeated guitar riff, “Precious Time” summons up the images of a train roaring down the tracks in the predawn hours. The tempo picks up considerably when Steve Smith’s drums join in for the second verse (they even sound like a train clacking over the rails during the chorus). All together, it gives this deep-cut a very memorable sound.

I can remember hearing “Where Were You” on the album-oriented station’s rock block weekends growing up, when they would play two, three or four Journey songs back to back. This one has a great instrumental solos and a rollicking chorus.

On “I’m Cryin’”, Schon really rings out the emotion in his guitar to match Perry’s equally heart-felt vocals.

“Line of Fire” explodes with a burst of energy right out of the gate that doesn’t subside for three minutes.

The title track “Departure” is a very brief, under forty seconds, instrumental interlude written by Schon. It sort of acts a break before the final act of the album.

The third and final single “Good Morning Girl” went to number 55 in the US. The song is a beautiful ballad the spotlights Perry’s vocals. The song clocks in at just a minute and three quarters.

“Homemade Love” picks up the tempo one more time to close things out. For me, this last song is not as much of a standout. It rocks along just fine but there are no hooks or such to make it jump out. I might have left it off the record and ended things on the slower note made up from tracks ten and eleven.

The 2006 reissue of the CD included two more tracks. The first is “Natural Thing” which was actually the B-Side to the single for “Don’t Stop Believin’” from 1981’s Escape (click here for my review of that album).

The second is “Little Girl” which appeared on the Japanese film Dream, After Dream which was released in late 1980. The band performed all nine songs on this soundtrack which took the group back to their early, progressive-rock sound.

When Departure was released, I was a freshman in high school. I can recall that Journey was a big thing, very popular on the album oriented-rock stations and with many of the teenagers in our school (particularly the female population). This album definitely was the transition of the band from their 70’s style to the hit machine that they would become over the early part of the 80’s. Indeed, the record was a bit of a departure from what had come before.

For more from Journey, click here.
Posted by Martin Maenza at 4:30 AM

Journey, oh the memories. '82 and '83 I rented a bus for all of us fans to get to the concert!! It was a blast, except the last year the bus driver was upset with us and switched buses, left some people behind in Buffalo. But all in all, great time!!!!